Solar Roadways Light the Way for the Future of Infrastructure 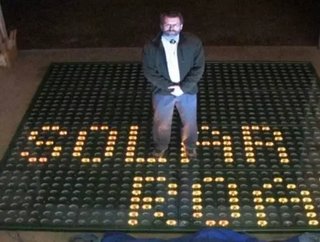 Click here to view this article in April&#39;s issue of Energy Digital Here&#39;s a glimpse into the future: high maintenance, expensive concrete roads...

Here's a glimpse into the future: high maintenance, expensive concrete roads and parking lots turned into glossy solar surfaces, fueling enough energy from the sun to power nearby communities and the electric vehicles above them.

According to inventors/creators of Solar Roadways, Scott and Julie Brusaw, sections of the road could be made out of solar cells to collect energy, which would more than pay for the cost of the panels. And what if LEDs were added beneath road lines for safer night time driving, and heating elements were added to prevent snow/ice accumulation in northern climates? Those are questions the Solar Roadways project sought to answer under a 2009 Federal Highway Administration contract to build the first ever prototype.

"We're building solar panels that you can drive on," Brusaw told the Scientific American. "The fact that it's generating power means it pays for itself over time, as opposed to asphalt."

Thus far, the results have proved favorable and the company was awarded a follow-up 2-year Phase II $750,000 SBIR contract in 2011 to build a prototype parking lot in Idaho—an effort expected to be showcased this Spring.

"The Federal Highway Administration told us they're not going to let us go out on the highway to start this,” Brusaw told CNN. "They told us to go into the parking lot first, prove your technology, perfect it and learn your lessons there -- which makes sense."

Actually, solar roads may even be safer than concrete. The hardness of glass on the solar panels falls somewhere in between the strength of steel and stainless steel, and does not accumulate a slick sheen of oil on its surface like cement. In addition to its strength, the glass will also be textured in a way that encourages tires to grip the surface and water to run off. It's also easier and faster to replace.

Each road panel is made of three basic layers. The road surface layer is translucent and rough enough to provide great traction, capable of handling today's heaviest loads under the absolute worst conditions. An electronics layer would control the heating element, lighting, communications and monitoring to create an intelligent highway system. The base plate layer would take the sun collected from the electronics layer and distribute it to homes and businesses connected to the roadway.

One of the great challenges of the Brusaws' big idea will be creating a type of glass that is also self-cleaning in order to cope with the grit and grime of heavy use over time. Surely, developing a revolutionary product like that will come at a price as well.

"The cost to develop a glass that will hold up in the fast lane of a highway? Fifteen [million] to 25 million dollars over three to five years," Brusaw added. "The cost in mass production? About $1 per square foot."

Furthermore, the solar roadway system would require sophisticated energy-storage capability. But the yet-to-be-invented glass does not intimidate the couple, who are determined to create a cross-country highway system that can double as an electricity generator and power grid—a model they believe could very well eliminate the need for fossil fuels in energy generation across the country.

"Based on my calculations, at 15 percent efficiency [from the photovoltaics] we produce more than three times the electricity we have ever produced," Brusaw told the Scientific American, adding "we think we can make enough to meet the nation's energy needs.”

Even when the roads are smothered in traffic, Brusaw estimates that solar collection would be at 50 percent.

A remarkable idea come to life, the Solar Roadway could very well become one of the greatest infrastructure innovations of the 21st century. It's time to upgrade.