Study: Fukushima Radiation Not a Health Threat in U.S. 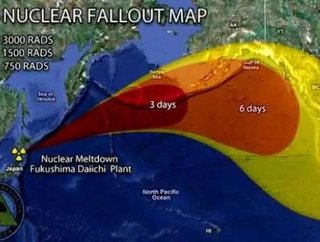 For all you folks that rushed to the drug store to stock up on iodine following the Fukushima nuclear reactor meltdown in March, rest easy. Researcher...

For all you folks that rushed to the drug store to stock up on iodine following the Fukushima nuclear reactor meltdown in March, rest easy.  Researchers from the University of California San Diego (UCSD) have released the first quantitative study of radiation leaked from the meltdown, and the result is that although radiation levels across California spiked because of the meltdown, it was not enough to warrant any hazard to human health in the U.S.

Atmospheric chemists from UCSD were led by Mark Thiemens, Dean of the Division of Physical Sciences at UCSD, in an effort to measure radioactive sulfur levels in the air following the meltdown.  When nuclear fuel rods melt, neutrons are released, and collide with chloride ions in the seawater used to cool the reactors.  This results in the loss of a proton from the nucleus of the chloride atom, turning it into a radioactive form of sulfur.  To avoid hydrogen (another product of the cooling process) from exploding, the vapors from the seawater are released into the atmosphere.  When introduced to the air, the radioactive sulfur reacts with oxygen to make sulfur dioxide gas and sulfate particles.

These particles were carried via winds from Japan to North America, sparking alarm that the U.S. and Canada would experience the same kind of radioactive fallout seen in neighboring countries to the Chernobyl disaster of 1986.  But fears of mutated babies, high cancer rates and radioactive crops may be put to rest with the UCSD study’s findings.

Thiemens and his team noticed an unprecedented spike in radioactive sulfur in the air following news of the meltdown, and using a model based on the National Oceanic and Atmospheric Administration’s observations of atmospheric conditions were able to pinpoint that the radiation was indeed coming from Fukushima.  The team then calculated how much radiation was actually leaked, concluding that 400 billion neutrons were released per square meter surface of the reactor’s cooling ponds.

"You know how much seawater they used, how far neutrons will penetrate into the seawater and the size of the chloride ion," says team member Antra Priyadarshi. "From that, you can calculate how many neutrons must have reacted with chlorine to make radioactive sulfur."

The team believes that for the levels of radiation observed in California, the concentrations a kilometer above the ocean around Fukushima must have been 365 times higher than normal levels.  In California, the team measured 1501 atoms of radioactive sulfur in sulfate particles per every cubic meter of air.  Yet, despite the higher than normal levels observed in California within the team’s four-day testing period, the team concludes that the levels are not dangerous to human health.

"Although the spike that we measured was very high compared to background levels of radioactive sulfur, the absolute amount of radiation that reached California was small," said Thiemens. "The levels we recorded aren't a concern for human health. In fact, it took sensitive instruments, measuring radioactive decay for hours after lengthy collection of the particles, to precisely measure the amount of radiation."