Decarbonisation can save heavy industry €200 billion a year 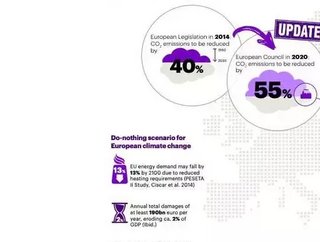 Heavy industrial companies in Europe could generate more than €200 billion euros annually in net value through decarbonization by 2030, according to Accenture’s new Energizing Industry report.

But it warns creating an effective pathway will require co-ordination between public and private sectors across a raft of areas, such as precise and robust carbon price mechanisms, European product carbon-labelling standard and an emissions framework.

With industrials representing 20 percent of EU emissions and about 25 percent of final energy consumption, they are a key enabler of the energy transition and decarbonization. However, the need to deliver a required 33% decrease in CO2 emissions by 2030 is daunting (see main image), and puts unprecedented pressure on industrials, which will drive new levels of convergence.

Götz Erhardt, a senior managing director at Accenture who leads the Resources industries group in Germany, Austria and Switzerland, said industrial decarbonization in Europe is a major opportunity for both energy producers and industrial energy customers.

"But while they are capable of driving transformational change and redefining business models, they need support from the public sector, given the investments required and the uncertainty of the pace and scope of technological innovation," he said.

"Successful industrial decarbonization requires a multi-faceted approach with the public and private sectors working in coordination to ensure Europe retains its competitive advantage.”

While future prices for CO2 emissions and green electricity remain uncertain, the research predicts the annual net value of industrial decarbonization will more than double between 2020 and 2030.

However, new technological innovations are expected to emerge, which could lead to growth in value continuing over time. Most transformative solutions, including electrification technologies and the process of capturing waste CO2, known as carbon capture, are not yet financially attractive compared to unabated natural gas, prompting many companies to focus on increasing efficiency in industrial processes.

“Industrial companies across Europe are struggling with uncertainty around the fragmented regulatory environment, infrastructure challenges, the development of key technologies and their pricing,” said Erhardt.

“That’s why decarbonization efforts are not progressing fast enough, despite the potential for innovation and value creation. However, public and financial support is at an all-time high, and, as key enablers of the energy transition, European industrial companies need to reimagine their operations at a faster pace."

Hydrogen is the most promising technology

The report shows that firms are already taking action – 40% of investments during the past five years were linked to decarbonization, including investments in renewables, hydrogen, intelligent cloud and energy distribution.

Even so, an evaluation of all global CO2 patent filings since 2013 revealed that the growth of new technologies or applications for the mitigation of or adaptation to climate change may be slowing. Instead, patents are increasingly focused on cost advantages and scale, indicating technological maturity.

For heavy industry, the report suggests hydrogen could significantly reduce emissions in operations, as it could partially replace conventional fuels.

The total net value of hydrogen adoption is forecast to increase from around €20-100 billion annually between 2020 and 2040. As a comparison, switching to natural gas would follow a decreasing trend, from generating €11 billion in total net value in 2020 to €6 billion in 2040.