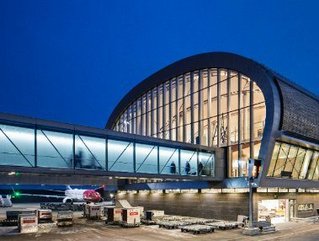 Oslo Airport has become the world...

Oslo Airport has become the world’s first airport to achieve a BREEAM ‘Excellent’ sustainability rating after a recent expansion which uses the country’s chilly climate in the most energy-efficient way possible.

The new design, which was put together by a multi-disciplined team from Nordic - Office of Architecture, will see energy consumption more than halved and CO2 emissions cut by 35%.  As well as that, enhanced levels of insulation mean the project has achieved Passive House level performance standards.

The design team applied what they called a “holistic approach to sustainability” at the heart of their plans.  That involves the harvesting of as much on-site energy as possible and natural materials have been used wherever possible, such as the new pier, which is made from timber sourced in Scandinavian forests.  Recycled steel and a new specially-made concrete, mixed with volcanic ash, has also been used throughout.

It’s by choosing these environmentally-friendly materials that they’ve been able to cut emissions by more than a third and ensure that consumption in the new expansion has been cut by more than 50% in the new structure, despite it being double the size of the existing terminal.

Gudmund Stokke, Founder and Head of design at Nordic - Office of Architecture, said: “We are delighted to have delivered a project which not only develops Oslo Airport’s distinctive architecture, but one which also provides a greatly enhanced experience for passengers.“