EVs alone 'won't get us to net zero' 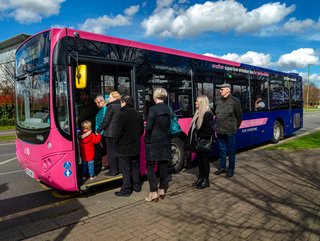 More motorists need to switch to bus and coach travel if the UK is to reach its net zero emissions goal, reports The Confederation of Passenger Transport

Switching car journeys to bus and coach is essential to achieving the UK’s net zero emissions goal, according to a new report released today from The Confederation of Passenger Transport.

The UK’s net zero commitments require a decarbonisation of the transport sector, the highest emitting sector and the only one whose emissions have increased since 1990. This requires ambitious action to tackle car greenhouse gas (GHG) emissions, which account for the majority of surface transport emissions.

The Decarbonisation Dividend report, created alongside WPI Economics, found that if every person in Great Britain switched just over one car trip to bus or coach per month each year (13 per year) by 2030 it would create a reduction of 2mn tonnes of CO2e. What’s more, a shift of just over two trips per month (26 per year) journeys by 2050 would result in a cumulative reduction of 19.5mn tonnes of CO2e. 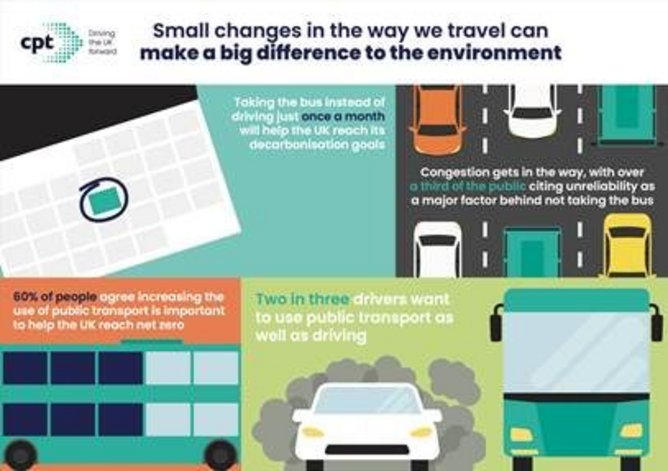 The findings of the report also identified health and societal benefits that could be reaped in years to come due to this shift. Such benefits include cumulative reductions in congestion valued at £28.8bn and cumulative health benefits worth £14.9bn – enough to build 33 new NHS hospitals - with benefits from reduced air pollution valued at £28mn.

It also emerged that a shift of two car trips a month to bus would save £30bn pounds by reducing congestion alone by 2050. This is larger than Manchester’s GDP in 2019.

Graham Vidler, CPT Chief Executive said without shifting demand from cars to buses and coaches, the UK will fall short of its net zero ambitions.

“The report shows that small changes in the way we travel can create a big difference. To unlock these benefits, each of us needs to switch just one journey per month from car to bus by the end of this decade, two journeys per month by 2050. That’s it," he said.

“The encouraging findings from the report and our consumer research demonstrate that the shift from cars to buses and coaches is necessary, desirable and, most importantly, possible.” 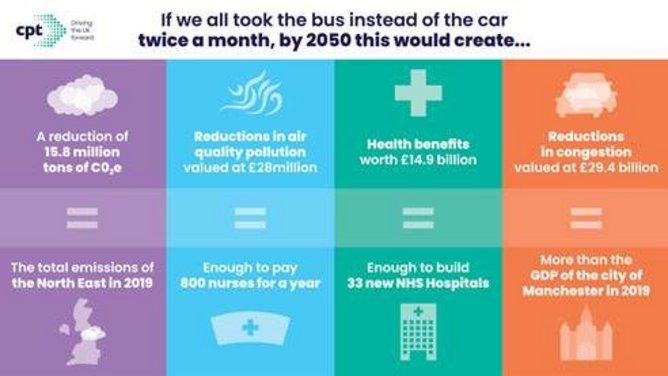 It emerged that inconvenient routes, infrequent services, slow journey times and unreliability were key factors behind buses not being a viable option for travel. Whilst a quarter of Brits do not know how much a single fare is in their local area.

However, over half of Brits admitted they’d be more likely to use the bus in their local area if the services were better.

In an increasingly green-conscious age, one in four car-driving Brits have considered taking the bus more compared to this time last year, with half of those doing so to be greener.

Vidler said its findings show that around half of Brits want to have a more balanced mix between using their car and taking the bus or a coach.

"With many parts of the country set to invest in speeding up journey times there’s a great opportunity for people to start shifting some of their journeys. Plus, getting more people on buses allows operators to invest in zero emission, increase network capacity and reduce fares resulting in a better service for Brits all round," he said.

Helena Bennett, Head of Climate Policy at Green Alliance, said buses and coaches are both critical forms of transport for millions of people across the country, so it’s encouraging to see their many benefits laid out so clearly in this report.

"Transport remains a thorn in the side of the decarbonisation agenda, and while technological advancements will accelerate a large proportion of the transition to net zero, we also need to think carefully about encouraging alternative, low carbon modes of transport," she said.