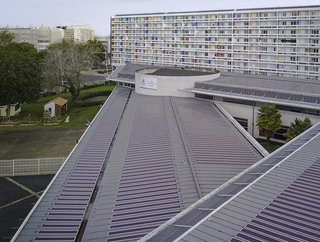 ENGIE, Heliatek, and the Department of Charentes-Maritimes installed the world’s largest solar film on the roof of the Pierre Mendes France...

ENGIE, Heliatek, and the Department of Charentes-Maritimes installed the world’s largest solar film on the roof of the Pierre Mendes France school in La Rochelle.

The Building integrated Organic PhotoVoltaic (BiOPV) was inaugurated on 16 November and cover 500sqm of Heliatek’s film.

The BiOPV was installed in record time, demonstrating the ease and speed-efficiency of installing the film.

Heliatek’s HeliaSol(R) was used for the first time on a roof installation, in which the self-adhesive back and preconfigured wiring means that the film only requires mounting and electricity connection.

The project took eight hours to install and only used six people, which works out at just over two minutes per film.

“Light roofs, which usually do not allow for standar PV technology, can now produce green electricity with our HeliaSol(R),” said CEO of Heliatek, Thibaud Le Séguillon.

“Thanks to our strong partner and investor ENGIE, we were able to rapidly realise this exciting project.”

The roof now has an annual generation capacity of 22.5kWp, approximately 23.8MWh, which will cover roughly 15% of the school’s electricity demand.

“Renewable energy is an essential part of our strategy of decarbonisation, decentralisation as well as digitalisation of energy. Almost half of the energy consumption comes from the building sector,” commented Isabelle Kocher, ENGIE’s CEO.

“Buildings that couldn’t previously be used for energy production will be able to cover their own electricity requirements. With Heliatek’s technology, they will contribute to a decentralised and green energy supply.”