How the Middle East is going green 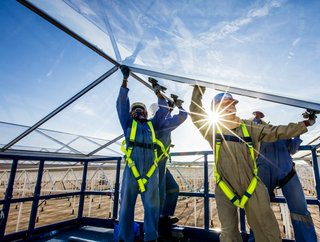 Each year Lloyd’s Register conducts its award-winning Technology Radar research, taking a global look at technology and its advancements across man...

Each year Lloyd’s Register conducts its award-winning Technology Radar research, taking a global look at technology and its advancements across many different industries. The company is a technical and business services organisation, wholly owned by the Lloyd’s Register Foundation which is dedicated to research and education in science and engineering. Having begun as a humble marine classification society in 1760, the company now boasts around 8,000 employees across 78 nations, and is well known for its high levels of technical excellence.

Lloyd’s Register’s Technology Radar research has previously focussed on the oil and gas sector, and more recently the low carbon sector, including nuclear energy, renewable energy, energy storage, and infrastructure. These are industries which have expanded enormously in recent years, competing strongly with fossil fuels, and technological developments have sped up in response to create some serious breakthroughs.

Solar power especially has become sophisticated and efficient enough in recent years to compete with fossil fuel, the Technology Radar has found, and solar cells are having an extraordinary impact on the world of green energy. Current projects in the sector include the future commercialisation of a photothermal process which turns heat as well as light into electricity, a compound of perovskites that can be painted or sprayed onto surfaces and is cheaper than commercial silicon crystals, and research by MIT last year that proves solar thermophotovoltaics could outstrip traditional maximum efficiency of solar cells.

One area which has developed particularly rapidly in recent years, thus becoming a great interest for Lloyd’s Register, is solar energy in the Middle East: a region not so well known for its green credentials, yet one which is swiftly catching up and making its own mark in the world of renewable energy. Energy Digital speaks to Karl Ove Ingebrigsten, Director of Low Carbon Power Generation Division at Lloyd’s Register, about the Middle East’s contribution to solar and the Technology Radar’s findings.

“The report shows that industry experts are optimistic about the pace of innovation in the low carbon space, and it reveals which technologies will have the most impact on the sector,” says Ingebrigsten. “600 professionals across the low carbon industry contributed their opinions and insight into the report, rating a number of technologies in terms of their potential impact, the time it would take for these technologies to hit the market, and how likely they are to be adopted.

“Countries that have embraced renewable energy have seen the rewards. Investment grows, jobs grow, and there are economy benefits across the board; the Middle East is no exception. Technological developments are indeed making a low carbon future increasingly viable, and driving down the cost of technology development and deployment is a key factor borne out of the Technology Radar Low Carbon survey. Developmental costs are still seen as the main barrier to low carbon generation; the Middle East is the region least likely to consider cost a significant barrier. Instead, respondents cite stringent regulations as the leading obstacle.”

Still, solar energy is the most significant focus for renewable energy in the Middle East. Why? In Ingebrigsten’s words “the sun never stops shining in the Middle East,” but the region’s optimism for this particular renewable goes beyond that: “An important realisation has emerged: the region is coming to terms with the impact of the ongoing low oil prices, issues in the wider MENA region, and growing concern with global investors. The shift in sentiment towards renewables is led by the government’s approach to accelerating regulatory policy. With Doha emerging as the 12th most polluted city in World Health Organisation’s ranking for 2013, sustainability has been at the forefront of all ongoing construction projects. Qatar has set initiatives in place to reduce its carbon footprint and enhance energy delivery by increasing the number of renewable energy schemes.”

The UAE aims to have 30 percent of its power generation coming from renewable sources by 2030, with Kuwait and Qatar aiming for 15 and 20 respectively. Increased focus on green R&D in the region means progress has happened at an astonishing rate, one of the best examples being Oman’s Miraah project. It is set to be one of the world’s largest solar plants, saving 300,000 tons of emissions per year – the equivalent of removing 63,000 cars from the road. The majority of participants at a Lloyd’s Register briefing last November in Abu Dhabi agreed that the growth of this low-carbon market is no threat to the hydrocarbons business, which will still be a primary source of energy for five decades; rather, renewables open gateways for hydrocarbon producers, expanding the region’s energy portfolio and R&D capabilities.

The GCC, a region with one of the world’s highest rates of pollution, has repeatedly solidified its status as an environmental ally, and does not take its aims lightly. “With 2020 rapidly approaching, those countries with percent targets are now looking to review their position, and determine relevant policy focussed on achieving targets set in Paris with longer term goals,” says Ingebrigsten. “The Middle East would benefit from an integrated energy policy, which would provide signposts to guide all the stakeholders towards a low carbon future. The adoption of new technologies to help define a low carbon future with widespread and cost effective implementation is the next step in helping the region realise this vision.”

Ingebrigsten concludes: “The Technology Radar report acknowledges there is a considerable level of multilateral cooperation and collaboration already happening in the region – this has created a strong and united movement to see positive change. The findings in the report will also enable the industry to assess best practice and key stakeholders’ approach to sustainability, and to encourage ever-greater innovation in the region. It lies at the heart of what Lloyd’s Register believes to be essential for the future health of the Middle East energy industry, as the implementation of new technology has safety implications which are fundamentally a driver for the industry’s future.”