How New York City Converted Waste to Biogas and Improved ... 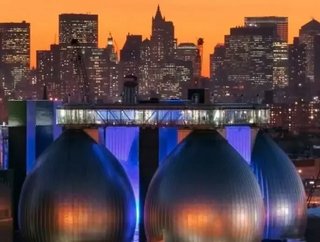 Rising out from the Brooklyn waterfront of the East River are eight giant stainless steel-clad eggs, which glow blue during the night. The striking land...

Rising out from the Brooklyn waterfront of the East River are eight giant stainless steel-clad eggs, which glow blue during the night. The striking landmark, which is visible from various vantage points in Manhattan, Queens, and Brooklyn, has become a symbol of the bold and innovative ideas New York City is known for; now even more so than its elegant architecture.

The eight gleaming structures are digester eggs for the Newtown Creek Wastewater Treatment Plant processing as much as 1.5 million gallons of sludge every day. It is the largest of New York City’s 14 wastewater treatment plants, and it will serve as a blueprint for the type of transformative, sector-crossing projects needed to improve air emissions and meet greenhouse gas reduction targets.

In a partnership that will reduce the amount of organic waste sent to landfills, produce a reliable source of clean energy, and improve air quality, Waste Management has started delivering pre-processed organic food waste to the Newtown Creek Wastewater Treatment Plant where it is added to wastewater sludge to increase the production of biogas.

In addition, a first-of-its kind project with National Grid will convert the biogas by-product into pipeline quality renewable natural gas for residential and commercial use. Together, these projects have the potential to produce enough energy to heat nearly 5,200 New York City homes, reduce annual greenhouse gas emissions by more than 90,000 metric tons and help NYC reach its goal of reducing municipal greenhouse gas emissions by 30 percent by 2017.

This renewable energy project will harness part of the 1.3 billion gallons of wastewater that New Yorkers generate every day; and the public-private partnership that made this possible will reduce greenhouse gas emissions by the equivalent of removing nearly 19,000 cars from City streets. The projects may also act as a catalyst for developing new markets and technology for the resources recovered, both in New York City and elsewhere.

“We are committed to delivering a low-carbon, sustainable energy future and we are proud to partner with the Department of Environmental Protection in this first-of-its kind project to demonstrate that renewable gas is a viable option to achieve this vision,” said National Grid New York President Ken Daly.

Biogas, which is mostly methane, is a by-product of the wastewater treatment process. Methane is also the main component of natural gas. The Department of Environmental Protection (DEP) currently reuses approximately 40 percent of the biogas produced at the Newtown Creek Wastewater Treatment Plant, and the new partnership with National Grid will ensure that 100 percent of it goes to beneficial reuses and does not contribute to greenhouse gas emissions from the plant.

National Grid will finance the design, construction, operation, and maintenance of the biogas purification system and initially DEP will provide the biogas free of charge. Once project costs have been recouped, profits will be split between DEP and National Grid’s customers. Construction of the purification system began in 2014 and is expected to be completed in 2015.

During the summer of 2013, Waste Management’s Varick I transfer facility in Brooklyn began processing organic food waste collected from local schools into a liquefied feedstock using the company’s proprietary Centralized Organic Recycling equipment (CORe)SM process. The feedstock is delivered in sealed tankers to the Newtown Creek Wastewater Treatment Plant where it is added to wastewater sludge to produce additional biogas.

The sludge is placed in an oxygen-free environment and is heated to at least 95 degrees Fahrenheit for between 15 to 20 days in the digester eggs at Newtown Creek Wastewater Treatment Plant. This stimulates the growth of anaerobic bacteria, which consume the organic material in the sludge. The digestion process stabilizes the thickened sludge by converting much of the material into water, carbon dioxide, and biogas.

Taken together, the initiatives have the potential to reduce greenhouse gas emissions by more than 90,000 metric tons a year. Of this reduction, 54,500 tons will come from diverting the approximately 153,000 tons of organic waste from landfills, 32,400 tons will come from using the biogas, a renewable energy source, and offsetting emissions from traditional means of harvesting the natural gas, 2,290 tons from reducing the 2.1 million miles of truck trips, and 840 tons from diverting the excess biogas from the flare at the Newtown Creek Wastewater Treatment Plant.

In the past several years, the City has pursued a portfolio of initiatives to increase in-city renewable energy, improve air quality, and divert solid waste from landfills, as outlined inPlaNYC, former Mayor Michael Bloomberg’s sustainability blueprint. The City is more than halfway towards achieving its goal of a 30 percent reduction of greenhouse gas emissions citywide by 2030, and from City government operations by 2017.

Since 2008, the levels of sulfur dioxide in the air have dropped by 69 percent and since 2007 the level of soot pollution has dropped by 23 percent. The cleaner air enjoyed by New Yorkers today is preventing 800 deaths and 2,000 emergency room visits and hospitalizations from lung and cardiovascular diseases annually, compared to 2008.