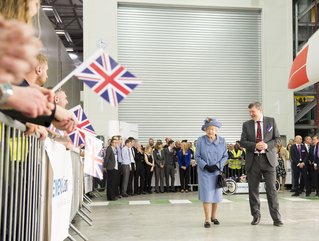 The Queen of the UK made a visit to an offshore wind turbine blade factory in Kingston upon Hull. The Siemens Gamesa facto...

The Queen of the UK made a visit to an offshore wind turbine blade factory in Kingston upon Hull.

The Siemens Gamesa factory has been in operation for over a year now and has produce more than 200 turbine blades, each measuring 75m long.

The manufacturing facility is located at Alexandra Dock, and employs over 700 workers.

Within the lifetime of the Queen the UK’s energy habits have dramatically changed; when Queen Elizabeth II was born 97% of the UK’s power was generated by coal, whereas in 2016 more than 50% is fuelled by low-carbon sources.

“The Queen's visit sends a powerful signal of just how far the UK's offshore wind industry has come, and that it is a key part of the energy mainstream,” reported Hugh McNeal, RenewableUK’s Chief Executive.

“The apprentices who welcomed Her Majesty to Siemens Gamesa’s state-of-the-art factory in Hull are great examples of the tens of thousands of British people now working in our world-leading sector, including its flourishing supply chain.”

“During her reign, the Queen has seen some of the most profound changes in our nation’s history, and our awareness of the importance of taking practical action to protect our environment by switching to renewable energy is a prime example of this.”