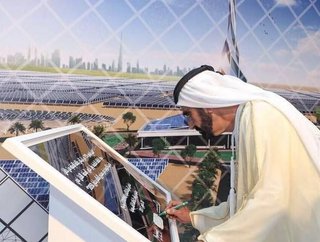 An Engineering Procurement Construction (EPC) agreement has been signed for the fourth phase of a major sola power project in Dubai. Shangh...

An Engineering Procurement Construction (EPC) agreement has been signed for the fourth phase of a major sola power project in Dubai.

Shanghai Electric Generation Group (SEGC) has signed an EPC agreement with the Dubai Electricity and Water Authority (DEWA) for a 700MW CSP project to be built at the Mohamed bin Rashid Solar Park in Dubai.

Under the agreement, the worlds tallest CSP tower will be built at 260m as well as parabolic troughs which will collect heat and store it “molten salt to supply electricity on demand during the day and night.”

The project is the fourth phase of the Mohamed bin Rashid Solar Park, the largest thermo-solar power plant in the world.

The world’s most powerful 8.8MW turbine has been installed in Aberdeen Bay

"I am pleased to be here in Shanghai to attend the signing of the Engineering, Procurement and Construction Agreement for the completion of the fourth phase of the Mohammed Bin Rashid Al Maktoum Solar Energy Complex," said DEWA MD & CEO of DEWA, HE Saeed Mohammed Al Tayer. "This agreement builds on the strong ties between our two countries, which were formed by our common values ​​and the commercial and economic interests that unite us."

"By signing this agreement, we have taken a significant step towards starting the engineering and construction works. We are committed to supporting Dubai's Clean Energy Strategy through this project, which extends our portfolio in the energy sector in Dubai," said ACWA Power Chairman, Mohammad Abunayyan.