Stella Vie: solar-powered car that supplies energy back to the grid 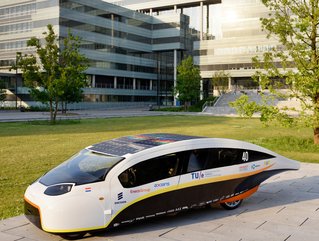 At the World Solar Power Challenge, a race through the Australian outback, the Stella Vie was regarded as “the future”.

At the World Solar Power Challenge, a race through the Australian outback, the Stella Vie was regarded as “the future”.

Dutch-based Eindhover introduced their family car that runs on solar power, whilst also giving surplus energy back to the grid through a smart charging and discharging system.

Although not being the first to finish the race, the Stella Vie was crowned overall champion due to its design, practicality, energy efficiency, and innovation.

“Team Eindhoven are to be congratulated on their achievement to date – clearly the most energy efficient solar car in the field, capable of generating more power than they consume,” commented Event Director, Chris Selwood.

The winning vehicle, for the third time in a row, was the Dutch Nuna9, which finished two hours ahead of the closest rival at 37 hours, 10 minutes, and 21 seconds – with an average speed of 55m/h.

The five-seater Stella Vie has an average speed of 43m/h and was designed to adhere to aerodynamics, aesthetic, and practicality.

“These incredible solar cars have been designed with the commercial market in mind and have all the features you’d expect in a family, luxury, or sporting car,” stated Mr Selwood.

This is the future of solar electric vehicles. When your car is parked at home it can be charging and supplying energy back to the grid.”