The US Military: Winning the renewable war 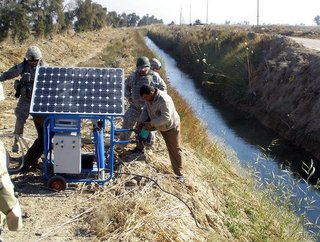 Resilient, sustainable and adequate sources of energy are key elements of the energy strategy of the US armed forces. In recent years, that kind of f...

Resilient, sustainable and adequate sources of energy are key elements of the energy strategy of the US armed forces. In recent years, that kind of fuel includes renewable energy. While environmental issues may not necessarily be the main driving forces for the US Department of Defense (DoD) when it comes to energy, the US military, the country’s major institutional energy consumer, acknowledges that renewable energy is often safer than fossil fuels in meeting its needs.

The US military consumes over 100mn barrels of oil per year, which leaves troops exposed to enemy attacks. Besides, vulnerability of oil prices and a potential rise in global oil demand raises concerns within the DoD regarding its ability to access reliable fuel sources during its critical missions.

Many military leaders admit that climate change poses national and international security threats, contributing to more social, political and economic instability of vulnerable countries and necessitating troop deployments. The military sees climate change as an accelerant of global conflicts. In practical terms, DoD realises that an over-reliance on fossil fuels could undermine its resilience during a power grid failure or reduce its fighting capability if energy supplies are compromised at the time of war.

“The military recognises the importance of renewable energy in achieving their missions in more effective ways,” says Galen Nelson, Director of Innovation at the Massachusetts Clean Energy Center, who collaborates with military leaders in the Bay State on clean energy projects. “Military leaders are committed to incorporating clean energy into their assets, not least because the cost of renewable energy has come down dramatically in recent years.” While the military has no plans to fully do away with fossil fuels, support for renewable energy has risen in all branches of the US Armed Forces.

The Pentagon relies on renewables both for military installations at home and in combat zones. In compliance with the Energy Independence and Security Act of 2007 and National Defense Authorization Act of 2010, military installations and facilities in the US are required to be energy efficient and produce or buy 25% of their total facility energy use from renewable sources by 2025. Regardless of the legislative requirements, the military energy policy is driven by cost reduction, energy efficiency and resilience; renewable energy has been an integral part of it.

Depending on geographical locations across the US, military installations get electricity from solar, wind, geothermal, waste-to-energy landfill gas and biomass. A priority for forward-operating bases abroad and combat zones is to mitigate an operational energy burden, while maintaining or improving mission effectiveness and minimising harm on troops.

DoD emphasises diversification of operational energy supplies in combat zones to reduce a risk of attacks on troops at fuel resupply lines. Renewable technologies, such as solar devices for servicemen, waste-to-energy, solar-powered unmanned aerial vehicles and other ways of using locally-sourced energy, are key to fuel diversification goals. “The Pentagon has a number of renewable energy contracts in the procurement pipeline that locks the military into a low-priced energy from renewable sources and provides strategic diversity across the energy supply chain,” said James Goudreau, retired US Navy Captain and former acting deputy assistant secretary of Navy for Energy.

“Not many Americans understand the value of renewable energy,” says Goudreau, who advocated for a deeper penetration of renewable energy sources as assets for the military during his service in the Pentagon. “The practical application and efficiency of renewable energy in the combat zone and in disaster relief efforts are paramount. For instance, at the individual level, a marine carries a 120-pound pack with water and batteries. By using a small rollup solar panel, he can drop 25 pounds from the pack and carry more ammunition instead, or just have the ability to move lighter and faster. Similarly, in disaster relief situations, a marine can carry more emergency supplies.”

The US Armed Forces set out ambitious goals to increase total energy consumption from renewable sources: Army – 25% by 2025; Navy – 50% by 2020; and Air Force – 25% of total electricity use from alternative energy by 2025. As military renewable power projects tripled to 1,390 between 2011 and 2015, which has benefited green energy contractors, primarily, utilities and solar companies, the military’s oil consumption fell by 20% from 2007 to 2015.

“While reliance on a specific renewable technology is not the main driver for the Air Force, and it is more a matter what can be used to achieve energy resilience and efficiency, solar has been the dominant source of clean energy for us at the base,” says Air Force Maj. Shawn Doyle with the Otis Air National Guard Base in Joint Base Cape Cod, Massachusetts. With the ultimate goal of making base energy infrastructure self-sufficient by using microgrids and relying less on public utilities, Maj. Doyle says that the Department of Defense is exploring the use of deployable microgrids and energy storage in the military, which are currently at a testing phase.

There is a common agreement among former and current military servicemen interviewed for this article that renewable energy is important to meeting two main recent energy goals of the US armed forces – resilience and efficiency. In response to the question – what energy resilience means to the military – retired Army Colonel and former Chief of US Army Operational Energy Office Paul Roege explains: “Resilience is the ability to survive and thrive under a changing situation that can happen quickly or over a long-term, and be able to recover quickly from an attack, whether it is cyber or physical, or due to changing global climate. And renewable energy is an important piece of the puzzle for military’s energy resilience because it can improve reliability.” It seems that the energy goals in the military mirror the civilian realities. Goudreau explains: “Not only military is focused on resilience, but more US states and cities are focused on it because of the pain they face under the changing global climate and impacts of extreme weather.”

While President Donald Trump is poised to undo green energy policies and regulations of President Obama, one government institution that seems to be determined to continue pursuing renewables is the US military.

It has an ally in using green energy and in recognising the threats of climate change to national security – the US Secretary of Defense, James Mattis. After a major assault on US troops in Baghdad in 2003, Secretary Mattis has pushed for the military to move away from oil to green technologies in order to help troops reduce the threat of attacks on fuel supplies. Renewable energy saves lives and that matters to military leaders.

Roege concludes: “Military is not going to change its stance on renewable energy because it has already made the justification for and the connection between, green energy and resilience. Resilience resonates with the new [Trump] administration, so it will not change the military’s energy policy. The military will not only continue to increase its use of renewable energy, but will also create value through renewables and strengthen their reliability.”