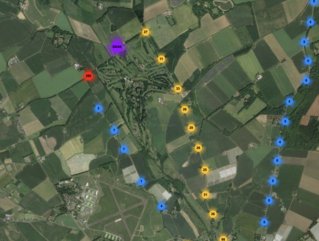 Hypervine has won a six-year framework with Scottish Water and Morrison Construction to reduce inefficiencies in the country's water infrastructure and reduce its carbon footprint.

By combining data captured from satellites, a product of its partnership with the European Space Agency (ESA) and its own mobile app, Hypervine provides accurate site data that brings predictability to site activities.

Digitising the construction process alongside providing a record of all activities into and out of construction sites as well as the previously-unseen processes that support the delivery of large-scale national projects is key to hitting strict emissions targets, especially after the recent Glasgow agreement outlined at COP26.

DV2 is one of Scotland’s largest capital investment infrastructure programs to date, and an opportunity to showcase how technology can augment the construction process to improve operations for years to come.

Paul Ingham, Operations Director Scotland for Morrison Construction, said after trialling Hypervine on some of its sites it saw an opportunity to invite Hypervine in as a partner on our DV2 bid to Scottish Water, leveraging the economic and environmental savings created by its technology that are essential in achieving Morrison’s ambition to differentiate as 'the Greenest Construction Partner' as it strives to cut carbon across its operations.

Working with Hypervine "adds alternative options to our capabilities" in terms of its operations and building a sustainable future for its customers, he added.

Construction companies and projects of such magnitude are faced with real difficulties when meeting emissions targets, The World Green Building Council calculates that 11% of global energy-related carbon emissions are from materials and construction, whilst the production of cement accounts for 8% of global carbon emissions according to the Chatham House thinktank.

Paul Duddy, CEO and founder of Hypervine, said it has come a long way since its inception, an idea spawned when a wall at Oxgangs Primary School in Edinburgh collapsed with “no warning”.

"Since that starting point, we have grown our product stack significantly, our technology now helps construction firms win bids, reduce costs and improve their carbon footprints whilst giving visibility over previously unattainable site operations. We see an exciting digital future for construction, working together to reach Net Zero across the industry.”

The carbon reducing technology will offset more than 20% of the electricity needed to operate the facility and generate over 150MWh of electricity each year.