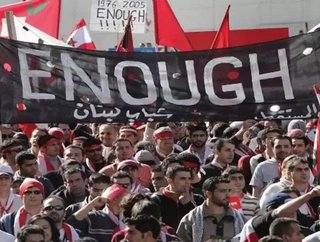 Following the reported killing of 13 civilian protesters, the European Union (EU) has decided to ban imports of Syrian oil.  Syrian President Bashar Assad’s regime has been murdering civilians since the outset of the uprising five months ago, and apparently Europe has had enough.  The ban will drain the regime of millions of dollars per day in oil revenues.

The United Nations (UN) estimates that 2,200 people have been killed since the uprising in Syria began.  Most recently, protesters have been marching under the slogan, “Death Rather Than Humiliation.”  While the protesters have typically sought peaceful anti-regime demonstrations, they have faced an onslaught of bullets from government forces.  Recent weeks have marked a shift in that sentiment, however, as protesters are now calling on their fellow Syrians to take up arms and inviting foreign military aid to defeat Assad’s regime.

Damascus earns about 28 percent of its total revenue from selling oil to countries like France, Germany, Italy and the Netherlands.  Syria exports roughly 150,000 barrels of oil per day, mostly to Europe.  The country earned a total of 3.1 billion euros ($4.4 billion) selling oil to the EU in 2010, accounting for 1.5 percent of the EU’s total crude imports that year.

“The impact of the ban in terms of EU oil supply is very minimal, but the impact on the financing of the Syrian regime is quite substantial,” says EU trade spokesman John Clancy.

However, with Syria’s regime reportedly receiving aid from Iran, analysts fear that sanctions alone will not be enough to coax a peaceful settlement to the protests.  The EU has also imposed bans on European banks from opening credit lines for Syrian oil sales and has prohibited European insurance companies from insuring Syrian cargo.