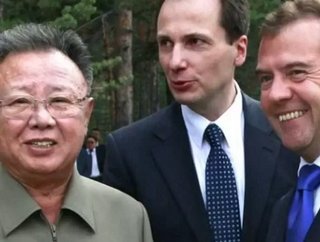 Russia has always had its eyes on North Korea for commerce purposes, and while the rest of the world has targeted North Korea as a &ldquo;rogue nation...

Russia has always had its eyes on North Korea for commerce purposes, and while the rest of the world has targeted North Korea as a “rogue nation,” Russia recognizes the small country as its only hope for land access to both North and South Korean markets.  In maintaining good relations with North Korea, Russian President Dmitry Medvedev has earned an unprecedented pledge from North Korean President Kim Jong-Il to abandon nuclear testing and processing.  Kim also agreed to provide passage to Russian gas suppliers for construction of gas pipelines to both North Korea and rival South Korea.

In the first Russian visit to neighboring North Korea since 2002, Medvedev exclaimed following the agreement, “I am full of positive feelings.  The meeting was substantive and open.”

Medvedev claims a proposed gas pipeline could be as long as 1,700 kilometers and carry up to 10 billion cubic meters of gas annually.  “The deal would concern the transit of gas across the territory of North Korea and accordingly the addition to this project of the Republic of Korea, considering that the main consumers are on its territory,” added Medvedev.

Study: Fukushima Radiation not a Health Threat in the U.S.

The Russian President also noted that North Korea is open to suspending its nuclear testing and processing activities if six-party negotiations were to resume.  North Korea has sought negotiations without preconditions in the past, but neighboring rival South Korea refuses unless the North suspends all nuclear activities prior to negotiations.  Kremlin spokeswoman Natalya Timakova stated, “Without preconditions, in the course of the negotiations, the North Koreans will be ready to solve the issue of introducing a moratorium on testing and spent nuclear fuel processing.”

Should Russia reopen six-party negotiations with North Korea, leading to nuclear disarmament and new gas deals with both North and South Korea, I’d be willing to bet Medvedev would be up for a Nobel Peace Prize.  This is an unprecedented agreement, and though it is still just hearsay at this early stage in talks, its implications could reshape world politics as well as the Asian energy sector.