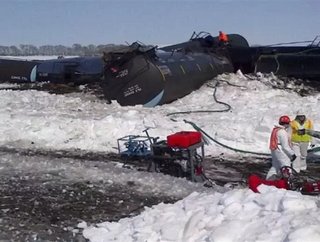 Canadian Pacific Railway Ltd, Canada's second-largest railroad, reported that 14 of its 94-car, mile-long train fell off the tracks. A spokesman says only one 26,000-gallon tank had ruptured and has yet to comment on the type of crude spilled. Meanwhile, the Minnesota Pollution Control Agency estimates that 20,000 to 30,000 gallons, 475 to 715 barrels, leaked, Reuters reports.

Rail shipment of oil has rapidly increased in North America as oil production has outgrown pipeline capacity. On average, about 40,000 barrels per day were shipped via train to the US in 2012, according to Canada's National Energy Board.

Although environmentalists continue to vehemently oppose the prospect of pipelines carrying oil from Canada's vast tar sands to refineries in the US Gulf Coast, supporters beg the question: is rail any better?

Actually, it probably is. Spills from rail cars are rare, and delivering crude by rail has been historically effective for producers to develop massive volumes of oil production in areas of the US lacking pipelines. The Keystone oil pipeline alone has already seen twelve oil spills in North Dakota—the largest of which included about 400 barrels of oil. And that's just the beginning. Is it worth the risk?