Shell Oil Spill off Nigeria's Coast: Worst in a Decade 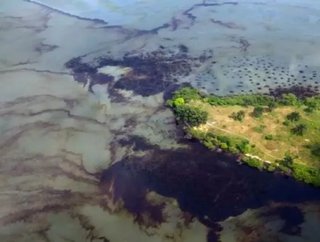 Oil from a Royal Dutch Shell offshore spill has spread to nearly 100 nautical miles after a leak occurred while loading a tanker Wednesday, resulting...

Oil from a Royal Dutch Shell offshore spill has spread to nearly 100 nautical miles after a leak occurred while loading a tanker Wednesday, resulting in what may be Nigeria's worst spill in a decade. Shell estimates the Bonga spill to be around 40,000 barrels or 1.68 million gallons of oil, becoming the second major oil spill since Mobil's slip-up in 1998.

Peter Idabor, the head of the country's oil spill management agency expects oil to start showing up on Nigeria's coast Thursday afternoon, devastating wildlife, fish and birds in the area. The company has sent ships out to use dispersant on the oil sheen and infrared equipment to trace places where the sheen is the thickest.

According to SkyTruth, a nonprofit based in West Virginia that uses satellite imagery to detect environmental problems, Shell and other Nigeria official could be massively disguising the scope of the spill. SkyTruth estimates that the slick may stretch across 350 square miles of ocean, three times what Nigerian authorities have reported.

"The spill could be near the upper limit of what Shell has stated," John Amos, SkyTruth's founder and president, told the AP on Thursday. However, he said he needed more information to determine the spill's true scope.

Shell is already taking out advertising on search engines in an attempt to redirect those searching for the spill to their website. According to Shell's spokesman, Jonathan French, the advertising has come in the “interests of full transparency” so people can read about the spill's updates, or how the company believes the spill is less of a big deal than it actually is.

Shell's pipelines onshore have also spilled several times, resulting in a mess that many estimate will take 30 years to clean up in the Niger Delta. Environmentalists estimate that some 550 million gallons of oil have been poured into the Niger Delta in Shell's 50 years of production in the area (the Deepwater Horizon oil spill in the Gulf of Mexico is estimated at 210 million gallons).

A top supplier to the U.S, Nigeria produces roughly 2.4 million barrels of crude oil a day.