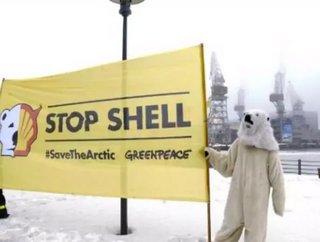 Royal Dutch Shell PLC is suing Greenpeace International to ban the group from protesting within 500 meters of its property off the Arctic coast of Ala...

Royal Dutch Shell PLC is suing Greenpeace International to ban the group from protesting within 500 meters of its property off the Arctic coast of Alaska, or pay a $1.3 million fine.

The move comes after Greenpeace's latest attempt to thwart Shell's operations Sept. 14, when protesters blocked over 70 Shell gas stations in the Netherlands for several hours, clamping gas pump handles together with bike locks and holding up banners. Firefighters eventually intervened and cut the locks, while 18 protesters were carried off to jail.

International laws on freedom of speech and assembly "do not grant Greenpeace unlimited powers to carry out protests that violate the rights of other parties,” said Shell's lawyers.

"Because Greenpeace International doesn't operate alone, but is the spider in the web of national and local organizations, our request includes that Greenpeace inform its satellite organizations that it no longer supports protests that are solely directed at causing Shell economic damage or that bring human lives and the environment in danger," Shell's complaint said.

Greenpeace activists have interrupted two Shell-owned ships this year. A US court ordered the organization to remain 200 miles away from Shell's Alaska projects.

The environmental group says Shell, which is pursuing three lawsuits against Greenpeace USA and 13 other environmental organizations, is distracting the public from Shell's inability to safety pursue drilling activity in the Arctic.

"All this is a thinly-veiled attempt to prevent public scrutiny of the true cost of its drilling campaign and its ability to deal with a disastrous oil spill," said Greenpeace lawyer Teulings.