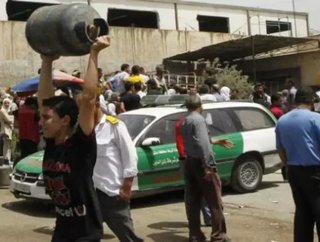 Syria&#39;s oil minister Sufian Allaw says international sanctions have taken a toll of about $4 billion on the economy, pointing to the US and EU for...

Syria's oil minister Sufian Allaw says international sanctions have taken a toll of about $4 billion on the economy, pointing to the US and EU for putting pressure on President Bashar Asaad.

For Syrians, the sanctions have led to long lines to pay for inflated prices of cooking gas and other products. According to Allaw, prices for a tank of cooking gas have more than quadrupled, while gas production covers only half of the country's needs. Officials are seeking imports from other countries like Venezuela, Algeria and Iran to fill the gap.

Before the uprisings began in March, Syria's oil accounted for around $7-8 million per day out of the country's $17 billion in foreign reserves in March of 2011. Today, Allaw tells reporters that the sanctions have cost the oil sector about $4 billion.

Although the uprising began as a peaceful call for reform, the government's brutal crackdown led to the death of over 9,000 people, according to UN estimates. Many fear that violence in Syria will spill over into neighboring Lebanon. Earlier this month, an outspoken Lebanese critic of Syria led to a gun battle in Tripoli, Lebanon, killing at least 8 people.

On Tuesday, armed gunmen kidnapped 11 Lebanese Shiite pilgrims in Syria, setting off a series of more protests and road blockades. Lebanon's Foreign Minister Adnan Mansour announced today that the captives had been located and should be released soon.

Prospects for talks between the regime and rebels are bleak as President Assad continues to dismiss the opposition as “armed terrorists.”