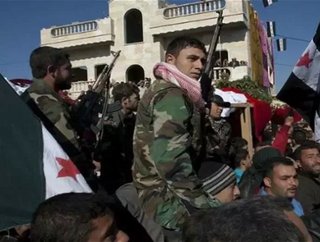 Before an explosion that hit a major pipeline through Syria earlier this month: After: Images from Buzzfeed &ldquo;It&#39;s not clear who or wh...

Before an explosion that hit a major pipeline through Syria earlier this month:

“It's not clear who or what hit the pipeline,” CBC's Anne McMillan said in an interview. “State controlled Syrian tv says an armed terrorist group sabotaged the diesel pipeline, but eye witnesses say government forces did the damage. What is clear is that Homs and now the nearby city Hama are under siege by Syrian forces as is a suburb of Damascus. Reports say that opponents to President's Assad's regime are being hunted down and taken away.”

President Bashar al-Assad has decreed to hold a referendum for a new constitution to replace the current one, which has enshrined his Baath party's dominate role. In April of last year, the government alleviated a state of emergency by adopting a law allowing a multi-party system. According to reporters who have seen a draft of the new constitution, the length of presidential terms would be significantly shortened.

What started out as mostly peaceful protests against Assad's authoritarian rule has now escalated into a bloody, armed insurgency as the government cracks down on the popular uprising. Over 5,400 people have been killed since last year alone, according to UN human rights chief Navi Pillay.

Though Assad's regime blames “terrorists” for attacking the pipeline, Syrians continue to defend their demands for democratic reforms. Nations in the Friends of Syria group have called on the UN to begin planning a peacekeeping mission in the country once the regime agrees to cease fire.