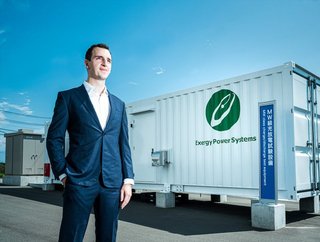 Exergy Solutions has selected Manchester for its European hub, bolstering the UK as it transitions to new power sources and renewable energy.

It marks the UK-based operation of Japanese-founded company, Exergy Power Systems, the spin off from The University of Tokyo that has developed a unique high power battery energy storage system (BESS).

Designed to rapidly respond to electricity network fluctuations caused among others, by the less predictable nature of renewables, the technology can be retrofitted to give existing power assets, such as back-up generators, new abilities to perform in a hybrid system.

Dr Mike Musil, CEO of Exergy Solutions, said it chose Manchester for its European base because of the clear vision it has for its own net zero future and the specialist digital and engineering talent the city attracts. “It also provides us with the opportunity to establish the right partnerships, being in the North West,” he said.

“The sector’s move to renewables has brought with it new challenges for reliable energy transition – with unpredictability of power supply and many assets too slow to react to grid disturbances. The Dynamic Containment (DC) market requires very fast reaction times from providers and the requirements are too challenging for some assets, such as back-up generators and fuel cells.”

He said its team has developed a BESS with a patented cell design and chemistry, to provide fast power supply to support both the grid through DC provision and large power consumers through uninterruptible power supply (UPS) services.

It is also collaborating with The University of Sheffield, an expert in maximising the capabilities of BESS, to develop its 1MW containerised system with funding from Tokyo Metropolitan Government and Tokyo Gas. It will simulate the hybrid operation in a virtual power plant and demonstrate how the system can participate in the Dynamic Containment (DC) market.

Tim Newns, Chief Executive of MIDAS Greater Manchester’s inward investment agency, said the city saw significant growth in the energy and environment sector last year. “As a city region, we are taking important steps towards Greater Manchester’s own net carbon neutral 2038 target – as well as seeing major moves by companies developing the innovation to support a greener economy here in the UK and internationally,” he said. To read more on Manchester’s aim to reach net zero by 2038, click here.

Cadent announced today that its HyNet North West Hydrogen pipeline is out for public consultation until March 11.

It has identified a potential route extending to Northwich, St Helens, Partington and Stanlow, with hydrogen produced at the Stanlow Manufacturing Complex transported to industrial users and power generators across the region. Click here for more details.