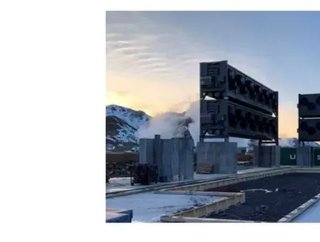 Climeworks, the Swiss company specializing in carbon dioxide air capture technology, has joined Microsoft's carbon removal portfolio as the IT giant strives for net zero emissions by 2030 and removing historic emissions by 2050.

Climeworks has developed a direct air capture technology solution that captures CO2 from the air and stores it underground using a mineralization process developed by Icelandic company Carbfix. Climeworks has direct air capture plants in Europe, with plans to scale up rapidly and increase capacity to a scale of removing billions of tons of CO2, and its modular collectors can be stacked to build machines of any size.

Microsoft will provide funding through its Climate Innovation Fund for Climeworks’ first-of-a-kind commercial-scale, fully renewable carbon capture and mineralization plant. Once CO2 is captured from air in Hellisheiði, Climeworks’ direct air capture technology and Carbfix mix it with water and pump it underground, and through the process of rapid underground mineralization the CO2 is stored safely and permanently.

"Being part of Microsoft’s CO2 removal portfolio is a game-changer," said Christoph Gebald, Co-CEO and Co-Founder of Climeworks. "Not only does Microsoft’s approach remove their own emissions, but they are also inspiring other businesses to invest in science-based and scalable solutions that have the potential to make a significant difference in the fight against climate change - like Climeworks' carbon dioxide removal."

Elizabeth Willmott, Carbon Program Manager at Microsoft, said: “Climeworks' direct air capture technology will serve as a key component of our carbon removal efforts. Their application set a high bar for technical rigor - especially the permanence of their solution, and we are looking forward to helping further scale their work with this purchase."

In addition to emissions reduction efforts, which prevent new CO2 from entering the atmosphere, climate scientists agree that removing historic and unavoidable emissions from air is crucial to limit global warming to 1.5°C. Businesses play a key role in the mitigation of global warming and are starting to address their current, past and unavoidable carbon emissions.

Another newcomer to Microsoft's portfolio is US-based Charm Industrial, which has created a novel process for preparing and injecting bio-oil and other carbon-containing liquids into geologic storage.

Microsoft is also supporting the development of 'Biochar', a charcoal-like substance that is produced by pyrolysis, which is the heating of organic agricultural and forestry waste (biomass) in the absence of oxygen.

Biochar projects that have been selected include Carbon Cycle, a sustainable agriculture company based in southeast Germany; Carbofex, which produces high-stability biochar manufactured with spruce thinnings from sustainably managed Finnish forests; and ECHO2, based in Australia, which focuses on developing and supplying modular systems to transform biomass residues to energy and biochar.