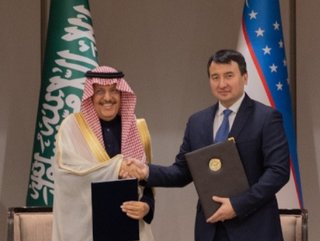 ACWA Power, a leading Saudi developer, investor, and operator of power generation, water desalination and green hydrogen plants worldwide, has signed extensive heads of terms agreements to develop a green hydrogen facility and a green ammonia pilot project in the Republic of Uzbekistan with the country’s Ministry of Energy and Uzkimyosanoat, a state-owned chemical company.

These projects are the first of their kind in the Central Asian country.

The first green hydrogen project will be an integrated facility and is set to be connected to an existing ammonia plant in Chirchiq, 45 kilometres from Tashkent, the country’s capital. The project is expected to generate 3,000 tonnes of green hydrogen a year. ACWA Power will oversee the full value chain of integration to this existing infrastructure project to green hydrogen, which is expected to improve the service factor of the facility and reduce its dependence on natural gas. The company has plans for an accelerated development timeline for this facility and is targeting a commissioning date of December 2024.

Mohammad Abunayyan, ACWA Power Chairman, said, "Uzbekistan has emerged as one of the most exciting growth countries for ACWA Power in recent years and is our biggest investment geography outside of KSA. We are proud that our giga scale development experience in green hydrogen is making us the preferred choice of partners across the world. As the world continues to grapple with increasing and devastating impact of climate change, the right solutions are the need of the hour..."

The second project involves the development of a 500,000-tonne green ammonia feasibility study. Since this project will reduce Uzbekistan’s dependence on natural gas by 600 million cubic metres per year, it is expected to cut carbon dioxide emissions by 1.5 million tonnes annually. The study will conclude by the end of next year.

Aside from these green hydrogen and green ammonia projects, ACWA Power also has five existing projects in Uzbekistan, including four wind projects and a combined gas cycle turbine facility. The country is the second largest in terms of value for the company after its home market of Saudi Arabia.