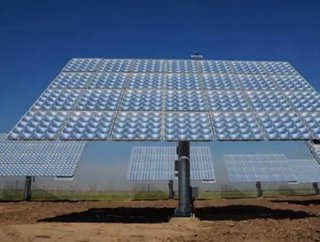 Written By: John Shimkus One major question faced by most mining operations is what to do with the mine tailings leftover. In many cases, tailings site...

One major question faced by most mining operations is what to do with the mine tailings leftover. In many cases, tailings sites can be reforested, but in others, tailings are not suitable for restoration and often remain as barren piles of upturned earth. Chevron, however, is taking a different approach with its molybdenum mine in Questa, New Mexico (USA) by installing a solar power farm to cover the mine tailings leftover from operations.

Chevron Mining is putting the mine tailings at its Questa, New Mexico mine to good use by installing 173 concentrating solar photovoltaic trackers across the 20-acre site. The solar farm will produce 1 MW of electricity at peak output, and with Questa’s reputation for 300+ days of sunshine per year, the solar farm is ideally located for solar energy.

“It is impacted land and we were really looking for a beneficial reuse of it,” says Jerry Lomax, Chevron Technology Venture’s vice president of emerging energy. “But it is not suited for reforestation, and after talking to EPA and the state agencies we felt that turning it from a brown field into a green field was the best use.”

The concentrating solar trackers chosen by Chevron are manufactured by French company, Soitec. Each tracking panel has a surface area of 18-by-20 feet and follows the sun throughout the day. The panels use concentrating lenses to focus the sunlight more intensely on the solar cells, thus increasing efficiency. The panels can generate twice as much electricity as traditional non-concentrating panels, but are generally more expensive.

This project and others are a part of Chevron’s forward-facing business plan to help developers of renewable energy technologies realize the true potential of their work at a commercial scale, particularly by helping finance projects that some banks may deem too risky, such as building a solar farm with high-cost concentrating solar technology.