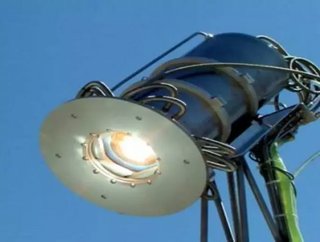 Solar Receiver by Solar Hydrogen Energy Corporation (SHEC) SHEC has been conducting research for the production of hydrogen via solar technology s...


Solar Receiver by Solar Hydrogen Energy Corporation (SHEC)
SHEC has been conducting research for the production of hydrogen via solar technology since 1996. The company has developed a suite of Concentrating Solar Power (CSP) technologies, including the world’s most efficient Solar Thermal Power (STP) technology, which works as a high-temperature heat carrier and high temperature thermal storage. SHEC’s patented technology, the very high efficiency solar receiver, has the ability solve such energy loss issues, as have been seen in other systems operating at higher temperatures.

Tom Beck, President and Chief Executive Officer, offers insight on the high-temp solar receiver: “This receiver is able to harness super concentrated sunlight to generate temperatures in the 850-degree C (1,532 F) range. This technology was originally developed to thermo-chemically produce hydrogen, but has now been adapted for power generation. Normally, at really high temperatures, such as 850 C, there is a lot of radiant-energy loss, also known as emissivity loss. This can account for a very large percentage of the energy collected with our system, being re-radiated. SHEC Energy only experiences a radiant-energy loss of between two and five percent at these temperatures.”

High Temperature Heat Carrier
Most traditional solar thermal power plants, like trough-based systems, utilize an oil substance, which operates on low-heat temperatures (390 C), for transporting heat from the receiver to the steam boiler. SHEC has developed high-temperature heat carrier technology, which is capable of transporting in excess of 900 C.

MotionPower™ by New Energy
New Energy is in the process of developing a technology for generating electricity from the kinetic energy that is lost when vehicles slow, or come to a stop on roadways. New Energy explains, “As millions of vehicles slow or come to a stop at toll plazas, rest areas, traffic calming areas, drive-thrus and countless other roadway points, their motion energy, derived from the burning of fossil fuels, is dissipated in brakes and lost as heat to the environment.”

The company has filed nine new patent applications with the U.S. Patent and Trademark Office, in addition to two international patent applications. New Energy believes, “Our MotionPower™ devices are engineered as a practical and useful alternative energy technology for generating clean electricity from the millions of vehicles on our roadways. More than 250 million vehicles are registered in America, and an estimated six-billion miles are driven on our nation’s roads every day.”

SolarWindow™ by New Energy
New Energy is also currently in the process of developing the first-of-its-kind SolarWindow™ technology. Essentially, this technology allows for electrical generation to occur when the world’s smallest-known organic solar cells are “sprayed” onto see-through glass windows.
The development of this technology marks the first time scientists have ever successfully developed and integrated environmentally-friendly, transparent compounds onto glass for the purpose of collecting electricity.

Conventional solar films are generally manufactured utilizing costly and slow manufacturing methods. General production methods involve high temperatures and “vacuum deposition” procedures designed to deposit solar materials onto substrates. Usually, the resulting product ends up being too thick to allow for transparency, which is a critical factor for the development of a commercially-viable, solar-powered glass window. The SolarWindow™ technology is also capable of generating electricity from artificial light, in addition to natural light sources.