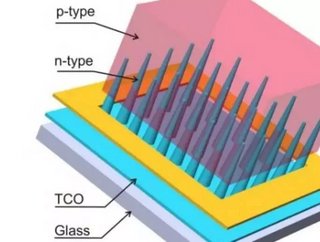 Well its official&hellip;. Nanotechnology is the future of energy. Week after week it seems like new discoveries in nanotechnology are leading to adva...

Well it’s official…. Nanotechnology is the future of energy. Week after week it seems like new discoveries in nanotechnology are leading to advanced energy generation breakthroughs, some of which even seem to challenge traditionally held laws of physics as in last week’s story on the nanotube heat wave effect.

This week’s nano-breakthrough comes from Oak Ridge National Laboratory in the form of solar panel “nanocones”—microscopic n-type semiconductor cones made of zinc oxide surrounded by a p-type polycrystalline cadmium telluride semiconductor. Yes, that all sounds very technical, but what it all boils down to is a 3.2 percent light-to-electricity efficiency compared to 1.8 percent in conventional flat solar cells made from the same materials. That’s roughly an 80 percent improvement in efficiency, and may be the answer to making solar power far more affordable.

“The important concept behind our invention is that the nanocone shape generates a high electric field in the vicinity of the tip junction, effectively separating, injecting and collecting minority carriers, resulting in a higher efficiency than that of a conventional planar cell made with the same materials,” Xu said.

It’s interesting to note that the focusing effect noticed at the tips of these nanocones may be linked to what fringe researchers have been claiming for years… that cones (along with pyramids) exhibit unique and misunderstood properties insofar as their ability to channel energy. Considering that nanotechnology has already opened many scientists’ minds to the possibilities of subtler energies present and perhaps exploitable at the quantum level—i.e., zero-point or vacuum energy—nanocones may be just another small stepping stone toward a better understanding of these future energy sources. It would come as no surprise at all if research into nanocones reveals even greater potential (and mysteries) than simply higher efficiency in light-to-electricity conversion for solar panels.