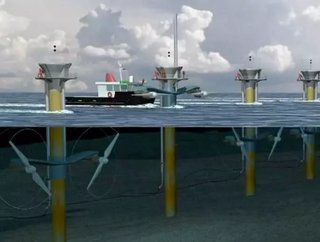 TO ENHANCE YOUR READING EXPERIENCE, VIEW THIS ARTICLE IN OUR INTERACTIVE READER! Written by Jonah Heller Unlike many elements of the natural world, tid...

Unlike many elements of the natural world, tidal fluctuation occurs twice everyday, with almost clocklike precision. But capturing the highly predictable ebb and flow of tides as a renewable energy source is not quite as simple.

Similar to hydroelectric power, tidal energy is captured as water flows across a fence or dam, which spins a turbine, generating electricity.

One setback is that tidal flow isn't continuous, and goes to zero while transitioning between high and low tides. Therefore the potential power generated from tide dams is estimated to be less than half that of river dams, while the costs are almost identical.

The moon, gravitational fields, and pure economics dictate that only absolutely ideal locations be developed with this type of sustainable technology. Additionally, the Department of Energy has claims that only 40 such locations exist on earth.

In comparison to other renewable energy sources, tidal energy is relatively expensive. But Blue Energy of Canada is optimistic they can generate electricity at rates less than $0.05 per kWh, putting them in competition with traditional power companies.

In other parts of the globe companies are slightly less hopeful. The United Kingdom for example, where the probability of building a large scale tidal energy facility is very much dependent on Renewable Obligation Certificates or ROC's.

At the moment the future of renewable energy and ROC's in the UK is unclear. David Robinson CEO of PD Ports Group based in the UK has said “There is a major reluctance to invest in this sector until the government sets the level for ROC's which will determine what proportion of their power that UK electricity suppliers must generate from renewable resources”. Until that time, projects are likely to sit on hold.

Peel Energy, a UK development group headquartered has been planning to install a tidal power system in the Mersey Estuary (near Liverpool) since 2005. But with a £3.5 billion ($5.63 billion) price tag, the project is currently stalled and unlikely to move forward without an increased subsidy.

Unfortunately, it looks like the tide could be going out for this renewable energy source, but only time will tell.