Hyperloop: Will it live up to the hype? 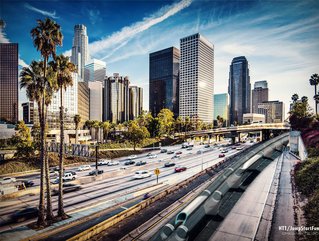 Thanks to the rise of hybrid vehicles and electric cars, we can now choose our own more efficient and sustainable modes of transport that aim...

Thanks to the rise of hybrid vehicles and electric cars, we can now choose our own more efficient and sustainable modes of transport that aim to put the environment first. But what is Hyperloop and what is all the fuss about?

Hyperloop is a high-speed train system championed by Tesla’s Elon Musk. In 2013, Musk published a white paper calling for an open-source approach to realising the technology needed to create Hyperloop. Likened to a vacuum tube system in a building used to move documents from floor to floor and touted as a “fifth mode” of transport, Musk describes Hyperloop as “a cross between a Concorde, a railgun and an air hockey table.”

Hyperloop is based on the ‘very high-speed transit’ (VHST) system first proposed back in 1972, combining a magnetic levitation train with a low-pressure transit tube. With the potential for speeds in excess of 700mph, the subsonic transporter is being touted as a credible, cleaner alternative to short-distance flights and would be much faster than existing rail networks.

There are, of course, challenges to overcome with Hyperloop, such as the high G-force which could be felt during turns and the practical implications of the acceleration and deceleration sensation passengers would experience on stop-start journeys, but we are edging closer to a transportation system that could totally transform the way we travel.

From A to B

Hyperloop Transportation Technologies (HTT) is working to realise Elon Musk’s original vision for Hyperloop by removing the problems associated with the friction of wheels at high speeds and replacing them with air bearings so transportation pods can float on air through the tube. The idea is similar to maglev trains in Japan, where electromagnetic levitation can allow speeds of up to 500km/h by eliminating the friction associated with traditional trains running on tracks. Propulsion would be delivered via linear motors, but as the vehicle would coast for 90% of the route, these motors would only be installed in short stretches near stations, and at regular intervals in longer stretches, to maintain speed.

Hyperloop One – now rebranded Virgin Hyperloop One following Richard Branson’s recent investment in the company – is taking a slightly different approach by using passive magnetic levitation, where the magnets are affixed to the trains that zip along an aluminium track to “deliver airline speeds for long distances due to ultra-low aerodynamic drag.” Recent tests at the company’s Las Vegas track have clocked speeds of 200mph, meaning there’s still work to be done to realise Musk’s 700mph Valhalla.

Both systems plan to use low pressure tubes which could tunnel underground, lessening their environmental impact, or alternatively be built on columns. These tubes would mimic high-altitude flying which offers less resistance against the pod moving through the tunnel, allowing for high speeds combined with optimum energy efficiency.

Devised as an ecosystem, Hyperloop would include sources of renewable energy - so expect to see tubes plastered with solar panels, with wind and geothermal energy being sourced along the tracks and within the tubes themselves. The target is to generate more energy within the ecosystem than the Hyperloop will consume.

When will it be operational?

Musk has yet to give a date when he expects to see Hyperloop services up and running, with his focus trained on his SpaceX and Tesla businesses. However, last summer he pledged that his business The Boring Co. will build the world’s longest tunnel running from New York to Washington DC via Philadelphia and Baltimore, utilising his Hyperloop technology in a bid to connect the Big Apple with America’s capital in a journey time of just 29 minutes. For now, a one-mile test track has been built by SpaceX next to Hawthorne, its California headquarters, where some of the first successful tests were carried out.

Shervin Pishevar, co-founder and chairman of Virgin Hyperloop One, aims to shuttle both passengers and cargo in its high-speed pods, which will be designed to depart as often as every 10 seconds. In an interview with CNBC, he said that “Hyperloop will be operational, somewhere in the world, by 2020,” and maintained that it was now the dawn of the commercialisation of the Hyperloop, with his company in dialogue with governments around the world on the scope of its routes.

Where will it run?

Musk has completed work on the first test section of a tunnel to serve a proposed route between Los Angeles and San Francisco which could rack up a $6bn construction bill for a passenger-only model or up to $7.5bn for a system that could also carry vehicles, and therefore offer larger returns, on the 354-mile journey. HTT is also investigating opportunities across Eastern Europe in a potential bid to link Slovakia, Austria and Hungary. Meanwhile, Musk’s plans to create a five-mile test loop in California by the end of 2018 are nearing fruition.

Working with partners such as the engineering and construction multinational AECOM, Virgin Hyperloop One plans to link cities across North America and will include these proposed routes: Cheyenne-Denver-Pueblo; Chicago-Columbus-Pittsburgh; Miami-Orlando; Dallas-Houston and Toronto-Montreal in Canada. In the UK, routes are planned for Edinburgh-London and Glasgow-Liverpool. Mexico will be connected via Mexico City-Guadalajar and India will feature two routes: Bengaluru-Chennai and Mumbai-Chennai.

Musk claims Hyperloop pods will be faster than trains, safer than cars and much less damaging to the environment than aircraft. With his focus on changing the world’s energy systems, Hyperloop fits in with Musk’s aim to shift transport away from carbon to renewables.

A feasibility study by the US Department of Transportation (DOT) estimates Hyperloop routes could be up to six times more energy efficient than air travel on short routes while delivering speeds three times faster than the world’s fastest high-speed rail system.

Examining the potential for Hyperloop pods to be more eco-friendly than traditional transport, researchers at the Helmut Schmidt University in Hamburg estimated the effects of building a 300km freight-dedicated Hyperloop in northern Germany. Quantifying the impact of removing thousands of trucks from roads, reduced air pollution and greenhouse gas emissions, they found Hyperloop could avoid emitting up to 140,000 tons of carbon dioxide each year (along with up to 0.2% of Germany’s production of air pollutants like methane and nitrous oxide) while delivering up to $1.07bn of value - equal to a third of its estimated $3.2bn investment.

How can it benefit businesses?

Hyperloop offers a huge opportunity for industry transformation. The obvious potential for speedier deliveries would offer savings versus short haul flights and regular rail and road freight options. Allied to this, by cutting down travel times between major cities, it could provide cheap and easy access for workforce enablement. Virgin Hyperloop One CEO Dirk Ahlborn suggests a ticket for a journey between Los Angeles and San Francisco could cost as little as $30 and allow the company to pay back its initial costs in just eight years.

Both HTT and Virgin Hyperloop One are open-source projects actively looking for innovative partners to achieve their operational goals, so the opportunity exists to become part of what could rapidly become a game-changing transportation success story with Musk even running a third annual Hyperloop pod design competition in 2018.

Virgin Hyperloop One’s Pishevar maintains it will be “the cheapest, cleanest, fastest form of public and cargo transportation in the world” while, with typical bravura, Musk suggests that realising the tech is “not that hard”. Will the billion-dollar brain be proved right? The journey to the future starts here.