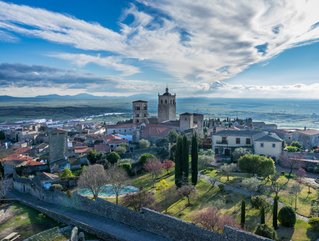 Spanish electricity giant Iberdrola leads Spain’s renewable energy market, with 15,828 of its 30,000MW global capacity being based in the country. Having already invested over €100bn in renewable energy projects and programmes worldwide since 2001, Iberdrola has committed to a further €34bn in global investments in renewable energy solutions, smart distribution networks and storage tech between now and 2022.

In line with this ambitious strategy, the firm has announced that it will install 400MW of photovoltaic (PV) panels in Extremadura, Spain, with two 50MW projects (the Majada Alta and Santa Antonio facilities) to be commissioned in Cedillo, Cáceres alongside a grid-connected 300MW PV plant in the same region. According to Iberdrola’s press release, the Cedillo projects alone will be comprised of 300,000 PV panels and could present 200 construction jobs. Along with its other projects in Extremadura, Iberdrola’s total capacity under construction and in the pipeline in the region amounts to 1,800MW.

“Iberdrola foresees that another of its projects in the region, the Campo Arañuelo complex (Arañuelo I, II and III of 150 MW) will be the next to commence construction at the beginning of 2020,” Iberdrola said in its press release on the matter.

“Its development -which could create another 200 jobs during construction- has a high local involvement since the engineering and environmental work has been awarded to the Extremaduran company Ecoenergías del Guadiana and the power transformers will be supplied by Faramax. The project also includes an energy storage system involving the use of an innovative battery.”

The news comes alongside reports that the firm will soon enter the Australian market for the first time.

Bloomberg reported on 14 November that Iberdrola aims to build a 320MW hybrid wind and solar farm in South Australia in 2021.

“Like a lot of countries, we see increasing demand from the public and businesses for their energy to come from clean sources,” said Xabier Viteri, Director of Renewable Energy at Iberdrola, in an emailed statement, according to Bloomberg. “When you have that demand, coupled with abundant natural resources for high-performance wind and solar, it creates a highly attractive market to invest in.”