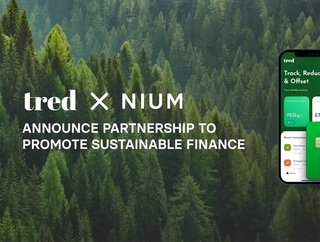 Tred is billed as the UK's first green debit card that lets users track, reduce and offset their carbon footprint

There are two elements of the Tred green debit card which immediately appear novel: firstly, it's not a conventional plastic card, as befits these e-wallet times (although you can opt in for a recycled plastic one), and perhaps more pertinently, it is billed as the UK's first green debit card that lets users track, reduce and offset their carbon footprint.

In line with the boom for all things ESG, sustainable finance is clearly taking root.

FinTech Tred - which claims its waiting list has shot up 122% since the start of the year and has raised more than £1m from over 1,000 investors - has selected global B2B payments company Nium to be its card-issuance partner, and will target UK residents.

Frederick Crosby, Nium Chief Revenue Officer, said: "This partnership will bolster Tred’s vision to be the platform that brings managing money and lowering our impact on the planet, effortlessly in one place."

Nium will not only provide Tred with a UK-issued consumer BIN (bank identification number) with GBP settlement, but will also be looking after the processing and e-wallet services. Tred Card users will be able to utilise Nium’s solutions to make payments securely either in-store or online.

Will Smith, Tred Co-Founder, said the partnership marked the natural next step, following the success of our crowdfunding campaign last month, which hit its target from pre-registered supporters in just 90 minutes. Cards will be issued later this year.

“These debit cards work seamlessly alongside the Tred app and help us achieve exactly what we set our minds to: to help people manage their money in a way that’s good for them and the planet. Every time our customers use Tred cards, they’ll help us plant trees and will contribute to a better future for our planet,” said Peter Kirby, Tred Co-Founder.

Nium has committed to donating a percentage of the interchange fee to Tred’s tree planting programme.

The e-card is a welcome move as every year, 30 million kgs of PVC are used for banking card manufacturing, equivalent to the weight of about 150 Boeing 747s, according to Thales, most of which end up in landfills. The main problem with PVC is it isn't biodegradable.

Global sustainable investment now tops $30 trillion, up 68 percent since 2014 and tenfold since 2004, according to McKinsey.