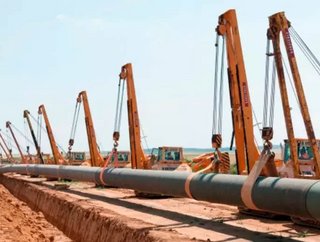 Streicher is laying 51.7 kilometres of gas pipeline between Corbie and Cuvilly in the Picardy region near Amiens. Working in the “bread basket” of France presents new challenges to pipeline construction experts and calls for new laying techniques.

The Haute de France II as a parallel pipeline to the existing Haute de France I. HDF II starts in French Dunkirk, near the Belgian border, and runs south. The soil in the generally flat area for the pipeline is loose and stony.

In the area around the Somme River a new trenchless construction method is to be used. The 1,120 meter stretch will be crossed using the direct pipe method. Direct pipe is a combination of two established laying techniques, horizontal directional drilling (HDD) and micro-tunneling.

The unique ecological requirements for completing this work affect the whole construction process. The area that Haute de France II runs through is known as the bread basket of France. The focus of the process is to protect arable land and ensure sustainable soil quality.

Therefore in bad weather and at a certain level of soil moisture construction work is halted so that the soil is not negatively affected. To ensure that the work is as efficient as possible, whenever possible the construction methods are decided on in agreement with the Chamber of Agriculture.

Work on the Haute de France II project is carried out using the CRC-EVANS welding method. This involves welding the root of the seam from the inside with four torches simultaneously.

Automatic welding machines with double burner systems are used for the filler layers as they allow welding from two places at a distance of 10 centimeters simultaneously. This allows for higher deposition rates than with other methods. The production rate is also significantly higher. The current top performance rate in Streicher’s work is more than 40 welding seams per day.

In total at the second construction site, approximately 3,200 seams will be welded and three valve stations and one receiving station will be completed. Since March nearly 230 Streicher employees have been working north of Paris on site on the project. The firstpressure tests should take place in October and the gas pipeline is due to be ready for use in March 2014.