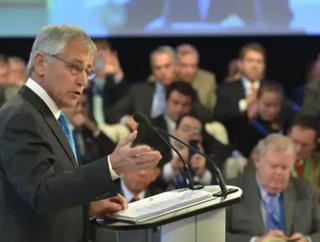 Last week U.S. Defense Secretary Chuck Hagel delivered the keynote address at the Halifax International Security Forum in Halifax, Nova Scotia. Because climate change will open the Arctic in the next decade, the U.S. Defense Department has developed a strategy to maintain peace and security in the region where substantial amounts of natural resources may be soon available.

According to Karen Parrish, of the American Forces Press Service, Hagel pointed out that climate change is “new to the modern world.” While it doesn’t cause conflict directly, he noted, climate change can add to the challenges of global instability, hunger, poverty, and conflict.

“Food and water shortages, pandemic disease, disputes over refugees and resources, more severe natural disasters – all place additional burdens on economies, societies, and institutions around the world,” he said. “Typhoon Haiyan in the Philippines is a reminder of humanitarian disaster brought on by nature. And climatologists warn us of the increased probability of more destructive storms to come.”

At the same time, Hagel noted, global energy demands will place more emphasis on emerging sources of energy from new frontiers, including the Arctic.

As reported by Parrish, here are some of the highlights of Hagel’s presentation on what the United State’s strategy will be in the Arctic:

- Remain prepared to detect, deter, prevent and defeat threats to the United States, and continue to exercise U.S. sovereignty in and around Alaska.

- Work with both private and public-sector partners, including the state of Alaska and Federal agencies, such as the U.S. Coast Guard, to improve understanding and awareness of the Arctic environment “so that we can operate safely and effectively.”

- Help preserve freedom of the seas throughout the region, within existing frameworks of international law.

- Be prepared to help respond to man-made and natural disasters in the region.

- Work with other agencies and nations, as well as Alaska natives, to protect the environmental integrity of the Arctic.

- “We will support the development of the Arctic Council and other international institutions that promote regional cooperation and the rule of law.”

- Hagel said that throughout history, “Mankind has raced to discover the next frontier. And time after time, discovery was swiftly followed by conflict. We cannot erase this history. But we can assure that history does not repeat itself in the Arctic.”