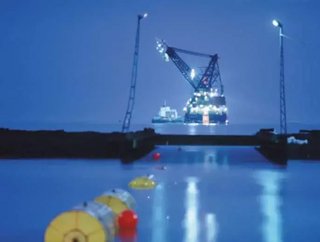 Gazprom, the giant Russian natural gas company, is constructing a 3,500 kilometers long gas pipeline across the Black Sea to Southern and Central Europ...

The offshore section of the South Stream gas pipeline will run under the Black Sea from the Russkaya compressor station on the Russian coast to the city of Galata on the Bulgarian coast. The total length of the Black Sea section will exceed 900 km with its maximum depth at more than two kilometers. The annual design capacity will be 63 billion cubic meters.

The pipeline will involve the partnership of nine countries, including Bulgaria, Serbia, Hungary, Italy and Russia, and has required substantial agreements between governments and major energy enterprises.

“The start-up of South Stream construction is indeed a historical event,” said Alexey Miller, Management Committee chairman, Gazprom.“The project embodies the intention of Russia and the countries of Southern and Central Europe to strengthen the partnership in the energy sector and to create a new reliable system of Russian gas supplies to European consumers. South Stream is a comprehensive infrastructure project that gives a powerful impetus to development of the economies in the participating countries.”

On Sept. 16, 2011, the Shareholders Agreement of South Stream Transport was signed for the construction of the offshore gas pipeline section. According to the document, Gazprom holds a 50 percent stake in the project, Italian Eni, a 20 percent stake, while German Wintershall Holding and French EDF have 15 percent stakes each.

The Consolidated Feasibility Study for South Stream was finalized in 2011 and included a feasibility study for the offshore section and feasibility studies for the respective gas pipelines in the host countries of Southern and Central Europe.

The first string of the offshore gas pipeline is scheduled to be commissioned in late 2015.