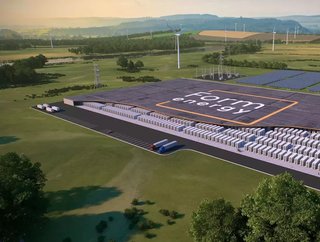 Form Energy believes it has cracked the conundrum of commercialising grid storage through iron-air batteries - and some of the biggest names in industry are backing its potential.

While solar and wind resources are the lowest marginal cost sources of electricity, the grid faces a challenge: how to manage the multi-day variability of renewable energy, even in periods of multi-day weather events, without sacrificing energy reliability or affordability.

Moreover, while Lithium-ion batteries are well suited to fast bursts of energy production, they run out of energy after just a few hours. Iron-air batteries, however, are predicted to have theoretical energy densities of more than 1,200 Wh/kg according to Renaissance of the iron-air battery (phys.org)

The active components of Form Energy's iron-air battery system are some of the cheapest, and most abundant materials: iron, water, and air. Iron-air batteries are the best solution to balance the multi-day variability of renewable energy due to their extremely low cost, safety, durability, and global scalability.

"This product is our first step to tackling the biggest barrier to deep decarbonisation: making renewable energy available when and where it’s needed, even during multiple days of extreme weather, grid outages, or periods of low renewable generation," it states.

Mateo Jaramillo, CEO and Co-founder of Form Energy, said it conducted a broad review of available technologies and has reinvented the iron-air battery to optimise it for multi-day energy storage for the electric grid. "With this technology, we are tackling the biggest barrier to deep decarbonization: making renewable energy available when and where it’s needed, even during multiple days of extreme weather or grid outages," he said.

Form Energy and ArcelorMittal are working jointly on the development of iron materials which ArcelorMittal would non-exclusively supply for Form’s battery systems. Form Energy intends to source the iron domestically and manufacture the battery systems near where they will be sited. Form Energy’s first project is with Minnesota-based utility Great River Energy, located near the heart of the American Iron Range.

Greg Ludkovsky, Global Head of Research and Development at ArcelorMittal, believes Form Energy is at the leading edge of developments in the long-duration, grid-scale battery storage space. "The multi-day energy storage technology they have developed holds exciting potential to overcome the issue of intermittent supply of renewable energy."

In May 2020, it signed a contract with Minnesota-based utility Great River Energy to jointly deploy a 1MW / 150MWh pilot project to be located in Cambridge, MN. Great River Energy is Minnesota's second-largest electric utility and the fifth largest generation and transmission cooperative in the US.