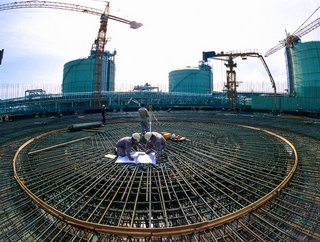 The new shipbuilding revitalisation programme has been valued at approximately US$2bn, which includes subsidies for replacing old vessles.

The President declared that “Korea can become a global shipbuilding leader once again” during his pledge to support shipbuilding, initially focusing on LNG.

“The vision of becoming a global shipbuilder is a national task that we cannot give up,” he added.

South Korea will also work on special measures “innovative growth of the shipbuilding industry” before the second quarter of next year.

The special measures will focus on supporting research in environmentally friendly self-driving technologies, as well as increasing orders for publicly funded vessels and creating a large-scale offshore wind facility.

One of the main attractions at DSME was the newly christened Vladimir Rusanov liquefied natural gas (LNG) tanker.

The tanker was built at DCME’s Okpo Shipyard in Geoje, Gyeongsangnam-do Province, and will service the Yamal LNG facility in the Russian Arctic.