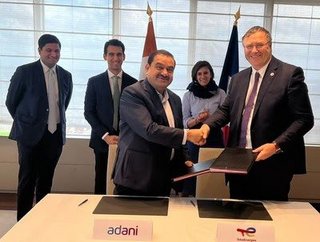 TotalEnergies has bought a 25% stake in Adani New Industries Limited (ANIL) under a strategic alliance which aims to create the world's largest green hydrogen ecosystem.

ANIL aims to invest over $50bn over the next 10 years in green hydrogen and associated ecosystem. In the initial phase, ANIL will develop green hydrogen production capacity of 1mn ton a year before 2030. TotalEnergies acquired the ANIL stake from Adani Enterprises Limited (AEL).

Both parties believe the new partnership will transform the energy landscape in India and globally.

"The strategic value of the Adani-TotalEnergies relationship is immense at both the business level and the ambition level," said Gautam Adani, Chairman, Adani Group.

"In our journey to become the largest green hydrogen player in the world, the partnership with TotalEnergies adds several dimensions that include R&D, market reach and an understanding of the end consumer. This fundamentally allows us to shape market demand. This is why I find the continued extension of our partnership to hold such great value."

Patrick Pouyanné, Chairman and CEO of TotalEnergies, said its partnership with ANIL is a major milestone in implementing its renewable and low carbon hydrogen strategy, where it aims to not only decarbonise the hydrogen used in European refineries by 2030, but also pioneer the mass production of green hydrogen to meet demand "as the market will take off by the end of this decade".

Pouyanné said it further strengthens its alliance with the Adani Group in India and contributes to the valorisation of India's abundant low-cost renewable power potential. With this investment in ANIL, the strategic alliance between the Adani Portfolio and TotalEnergies now covers LNG terminals, the gas utility business, renewables business and green hydrogen production.

"This future production capacity of 1 million ton per annum of green hydrogen will be a major step in increasing TotalEnergies' share of new decarbonised molecules including biofuels, biogas, hydrogen, and e-fuels to 25% of its energy production and sales by 2050," he said.

While Adani will bring its deep knowledge of the Indian market, rapid execution capabilities, operations and capital management philosophy to the partnership, TotalEnergies adds it deep understanding of the global and European market, credit enhancement and financial strength to lower the financing costs, and expertise in underlying technologies.

The partnership helps India in its quest to build the fundamental pillars of economic sustainability by driving decarbonisation of industry, power generation, mobility, and agriculture thereby mitigating climate change, and ensuring energy independence.