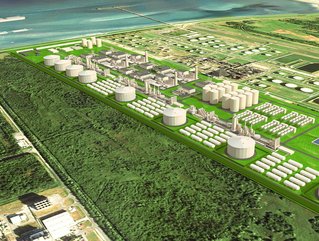 The current energy crisis has brought forward Tree Energy Solutions' (TES) plans to develop the German port of Wilhelmshaven into a global hub for importing green gas by at least two years and the terminal now also plans to accommodate LNG as an intermediate source of energy for Germany and Europe.

The fast tracking will provide for alternative energy security for Europe whilst accelerating the growth of green gas imports over time.

With green hydrogen at its core, the Wilhelmshaven green gas terminal is sustainable, carbon-neutral, and transitional, meeting the German’s government short term and long-term energy requirements.

“We are now planning further work to ensure an operational start of phase 1 by winter 2025 at scale," said Paul van Poecke, Founder and Managing Director at TES.

It is planning six independent tanks combined with six berths, using a novel approach with minimal environmental and visual impact. It is willing to accommodate any alternative gas importers and ensure third party access in line with current DG Energy regulations and practices.

Dow has signed a definitive agreement to take a minority stake in the Hanseatic Energy Hub GmbH (HEH) and is working with HEH's current members to advance Germany's capabilities to import supplies of LNG, bio-liquified natural gas and synthetic natural gas through the construction of an import terminal.

The HEH consortium, which now includes Dow, Fluxys, Partners Group and Buss Group, is planning to build, own, and operate an import terminal for liquified gases on Dow's Stade, Germany industrial park. This zero-carbon emission terminal, set to be built by 2026, will be co-located with Dow's facilities in Stade. Dow is contributing the land for the construction of the terminal as well as infrastructure services, off-gas heat, site services and mutual harbor use rights.

With a projected regasification capacity of 13.3bncm of natural gas per year, the import terminal supports the Joint Statement between the European Commission and the United States on European Energy Security by satisfying up to 15% of Germany's current natural gas demand. The project is subject to final investment decision, which is expected by 2023.

Atlanta Gas Light is to expand its LNG facility in Cherokee County. The project will double the facility's capacity and allow the company to stay ahead of projected natural gas demands.

The project includes the installation of a second tank, which will allow Atlanta Gas Light to store gas when it is most affordable and then have access to that supply during periods of peak demand. Construction is currently underway and will be completed in phases over the next three years.

Sempra and TotalEnergies expand US strategic alliance for LNG and renewables

Jeffrey W. Martin, Chairman and CEO of Sempra, said: "We own one of the largest energy networks in North America, and by collaborating with TotalEnergies to create additional scale advantages in LNG and renewable energy, our customers benefit from having access to cleaner and more affordable energy options and improved security of supply."