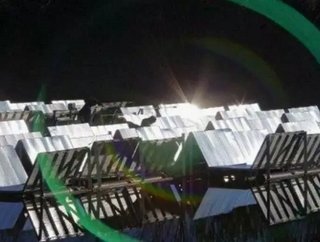 Inventor Marco Rosa-Clot, a professor at Florence University and CEO of Scintec, says while PV panels on buildings or in fields use up valuable farmland, they lose energy through overheating and are aesthetically unappealing. His new flower-petal-shaped panels, however, are not only out of sight, but more efficient and comparable in price to conventional solar systems. The Floating Tracking Cooling Concentrator (FTCC) system turns throughout the day, following the rays of the sun as the water beneath them provides cooling for its circuits.

During times of soaring energy costs, sun drenched areas like Sicily could largely benefit from the new take on solar. According to Rosa-Clot, Sicily has some 75 square kilometers of reservoirs that would be compatible with his system and the total cost of research invested in the project would be recouped if all proves successful. Thus far, the pilot project has been able to produce 30 kilowatts, or enough to support a dozen households.

South Korea has signed into a three year contract to build some of its own and discussions with France and Germany are underway.