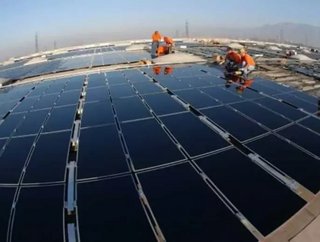 Rooftop solar energy is great for the home, but businesses are beginning to realize the potential of tapping into urban roof space for utilities-scale...

Rooftop solar energy is great for the home, but businesses are beginning to realize the potential of tapping into urban roof space for utilities-scale electricity generation.  Through a distributed approach—which links together several small-scale solar modules to essentially create a vastly dispersed solar farm—rooftop space can be taken advantage of for solar installation rather than building atop hundreds of acres of land.  That’s exactly the approach being taken by Bank of America Merrill Lynch, Prologis, and NRG Energy, who have teamed up to create the world’s largest rooftop distributed solar energy project in the world.

The companies have announced an offer of a conditional commitment from the U.S. Department of Energy’s Loan Programs Office to help finance the project.  The loan guarantee will support $1.4 billion of debt, which will bolster a total projected investment of $2.6 billion over the next four years, funded entirely by the private sector.

"NRG believes rooftop solar is a smart choice for industrial, commercial and residential property owners in markets around the country, and this program provides the commercial scale that will bring the benefits of solar power to customers across the country," said Tom Doyle, president of NRG Solar, NRG's solar subsidiary. "This program will nearly double the amount of grid-connected solar online in the United States today and make another positive contribution to cleaner air and a healthy environment."

Prologis—a leading owner, operator and developer of industrial real estate—is spearheading access to rooftops and will also act as developer, construction manager and program sponsor. "As one of the world's largest owners of distribution facilities and an active solar industry participant, we're pleased to be a partner in a project of this magnitude," said Drew Torbin, vice president of Prologis Renewable Energy. "This project will add significant scale to the distributed solar market and provides economic and environmental benefit to our shareholders and customers.

A distributed approach to solar energy is the smart next generation thinking that will drive the renewables industry forward.  As more and more utilities-scale solar farms face delays and criticism over land use issues such as natural habitat infringement, rooftops are already there and just waiting for a solar panel upgrade.  While maintenance of a vast network of solar rooftops spread out across entire cities may prove cumbersome, it will open up maintenance-related job opportunities, further spurring economic recovery.  What’s better is that the project is entirely funded by the private sector, which just goes to show that renewable energy doesn’t need to rely on government subsidies to be viable.