The Republican Debate: The GOP on Energy 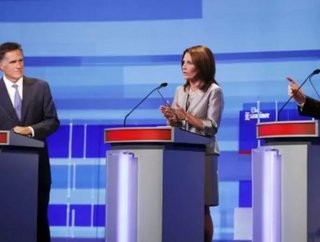 The Republican debate last night saw heated exchanges between the GOPs 2012 presidential hopefuls. While the economy took center stage, energy and the...

The Republican debate last night saw heated exchanges between the GOP’s 2012 presidential hopefuls.  While the economy took center stage, energy and the environment were topics of excited debate, especially one of the most controversial topics for Republicans: climate change.  Yes, cap-and-trade, the policy once hailed and later dismissed by Republicans as a free market means by which to control carbon dioxide emissions sparked the back and forth finger-pointing banter one comes to expect from these types of publicity stunts.  This of course leads to questioning the EPA’s oversight altogether.  However, considering the debate was held in Iowa—where wind energy and corn ethanol play an integral role in the state’s economy—candidates praised the two forms of energy typically scoffed at by Republicans.

Let’s start with cap-and-trade.  Rep. Michele Bachmann (R-Minn.) tore apart Minnesota Governor Tim Pawlenty for his prior support of cap-and-trade policy.  Referencing Pawlenty’s position as one of the Republican party’s leading climate advocates over the years, Bachmann accused him of pursuing policies similar to President Obama.  She commented, "When you were governor of Minnesota, you implemented cap-and-trade in our state, and you praised the unconstitutional individual [health] mandate, and ... you said the era of small government was over. That sounds a lot more like Barack Obama if you ask me."

However, Pawlenty, along with Rep. Newt Gingrich (R-Ga.), and former Governors Mitt Romney of Massachusetts and Jon Huntsman of Utah, have all backed away from once acknowledging the science of climate change and the need to address it.  Huntsman has been reported as saying that science should lead the discussion on climate change, although he no longer supports cap-and-trade for carbon dioxide regulation.

Each of the candidates seems to have a strong position against the U.S. Environmental Protection Agency (EPA), with Michelle Bachmann going as far as to call it the “job killing” agency of America in a previous debate in June.  However, Bachmann has repeatedly sought stimulus money and EPA grants for her state in the past.  What none of these candidates seems to realize, however, is that while the EPA certainly makes it more difficult for companies to get the job done, it's because they actually have to make sure it gets done right.  Could you imagine how much more polluted our waterways and land would be if there were no regulatory body?  Do these candidates really think that corporations will invest the extra time, money and manpower to make their operations as safe as possible both for human and the environmental health if there were no regulatory body making them do it?  I think not… at least not the majority.

Moving on.  Wind energy and corn ethanol got a positive nod from nearly all the Republican candidates at the debate, and while that may leave some of you scratching your head in disbelief, there is one very good reason for it.  The debate was held in Iowa, a state that rakes in over $5 billion a year from wind power and corn ethanol.  Huntsman has actually decided not to campaign in Iowa for fears that his opposition to subsidies for corn ethanol is too great a political hurdle to overcome in a state with such a strong agricultural base.  The majority of the candidates, however, showed support for Iowa’s pursuit of clean energy alternatives and are expected to sign a 130-foot-long wind turbine blade as a symbolic gesture.

While most of the candidates have certainly had their fair share of flip-flops on the issues across the board in regard to energy policy, one thing is clear.  If a Republican makes it into office in 2012, there will be a dramatic overhauling of environmental oversight.  With the U.S. economy struggling it will be a welcome opportunity to open up jobs and ease financial troubles.  Let’s just hope that America’s economic downgrade doesn’t equate to the same kind of environmental downgrade seen in countries with much less stringent regulation.  Sure, China’s economy is on the rise, but the phrase “breath of fresh air” doesn’t apply there.