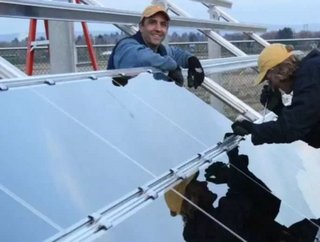 Thanks to recent advances in technology and a growing demand for renewable energy, solar power is starting to become a mainstream, commercial reality...

Thanks to recent advances in technology and a growing demand for renewable energy, solar power is starting to become a mainstream, commercial reality. According to the Associated Press (AP), solar power is expected to double this year in addition to doubling last year.

While more solar energy projects are planned over the next year than any other power source, the industry remains relatively small. Held back by high upfront costs associated with solar panel installations, the new drop in the cost of equipment is about to change the game. The AP reports that solar panel prices have plunged by two-thirds in the last three years, which has made it easier for installers to market the economic benefits of solar energy in addition to the environmental ones.

Across the U.S., solar power installations grew by 102 percent from 2009-2012 alone, and are expected to climb monumentally over the next decade. "Every manufacturer globally is looking around for the next major growth market, and the U.S. is the first one everyone points to," Shayle Kann, managing director for solar research at GTM Research, told the AP.

Due to the decline in costs of polycrystaline silicon, the main material used to build solar panels, in addition to an increase in production, solar energy is becoming affordable. In response to shrinking subsidies, Germany's biggest solar market experienced a recent sharp drop in demand, further bringing down prices with a surplus of solar panels.

The drop in material costs will take some of the burden off governments to provide subsidies for solar installation projects, but tax breaks and other subsidies from federal and state governments will still be an important component in making solar affordable. When the federal solar subsidy shrinks in 2016, proponents claim that solar panels will become cheap enough to make solar energy competitive with fossil fuels.