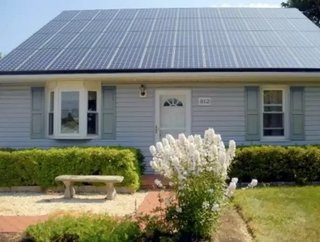 Cant stand the heat? Then get yourself a solar roof! According to a new study, solar roofs exhibit a unique air conditioning effect that may help sola...

Can’t stand the heat?  Then get yourself a solar roof!  According to a new study, solar roofs exhibit a unique air conditioning effect that may help solar-savvy homeowners stay cool amidst the record heat wave spreading across the U.S.

The current issue of the journal Solar Energy features a study that finds roofs adorned with solar panels tend to result in a ceiling temperature of five degrees F cooler than roofs without.  The solar panels apparently reduced the amount of heat reaching the roof by 38 percent.

"It's mostly that shadow effect, like when you park your car under a tree. The sun hits the solar panels, not your roof," says study co-author Jan Kleissl, an assistant professor of environmental engineering at the University of California - San Diego

Kleissl, along with researchers Anthony Dominguez and Jeffrey C. Luvall used thermal infrared imagery to measure the temperature of the Powell Structural Systems Laboratory, which is partially covered with solar panels.  The building is a commercial warehouse style building with little insulation.

The amount of energy saved as a result of the solar panel air conditioning effect is entirely dependent on the characteristics of the building itself.  In large commercial buildings such as the one tested, the savings may be very large.  The research team estimates that the average savings as a result of the cooling effect over the life of a solar panel rooftop system could be as much as five percent.

In winter months, the solar panels actually can act as an insulator, further extending the benefits in reducing the cost of heating a building. "It's like having a blanket," Kleissl says. "In winter, the solar panels won't allow all the heat to be lost to the atmosphere."

Kleissl’s research team is now working on a calculator to help businesses and homeowners calculate the cooling effect of installing solar panels on their roofs.