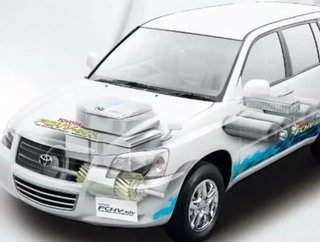 TO ENHANCE YOUR READING EXPERIENCE, CLICK HERE TO VIEW THIS ARTICLE IN OUR INTERACTIVE READER! In 1992, Toyota launched an initiative to design and mar...

In 1992, Toyota launched an initiative to design and market the world’s first fuel cell automobiles.  Coincidentally, this was the same year that the Earth Summit was held in Rio de Janeiro, Brazil, highlighting among other things the negative effects of excessive CO2 emissions released into the atmosphere.  Toyota has been working to answer the call to develop lower or no-emission automobiles utilizing advanced fuel cell technology ever since.

In its pursuit, the company has rolled out numerous prototype fuel cell vehicles.  In 1996, Toyota demonstrated its first in-house developed Fuel Cell Hybrid Vehicle (FCHV) at an exhibition parade in Japan.

In 1997, Toyota released its landmark gasoline-electric hybrid vehicle, the Prius.  The company quickly realized the potential of leveraging the energy efficient technologies in the Prius hybrid system to achieve increased efficiencies in fuel cell vehicles.  Later in that same year, the company unveiled the world’s first methanol fueled FCHV.

It was four years later, in 2001, that Toyota introduced hydrogen as a fuel for its FCHVs.  The FCHV-3 prototype offered advanced power output, and later that year, the FCHV-4 was developed and undergoing testing on public roads in Japan.  Through its membership with the California Fuel Cell Partnership, Toyota introduced the FCHV-4 to American roadways for testing.

It was also in 2001 that Toyota incorporated its fuel cell technology into public transportation, developing the FCHV-BUS1 in partnership with Hino Motors.

As if rolling out two vehicle prototypes and a bus design in a single year wasn’t bold enough, Toyota collaborated with General Motors and Exxon to announce the development of Clean Hydrocarbon Fuel (CHF).  The fuel was used to run the FCHV-5—released the same year.

By 2005, Toyota had perfected its FCHV systems to the point of being on-par in terms of performance and power density with gasoline-powered vehicles.  The only problem the company faced was that each of its prototypes cost roughly $1 million.

Toyota’s FCHV’s most recent metamorphosis has taken the form of the company’s highly successful Highlander SUV.  While the Highlander is a practical family vehicle, no millionaire would drop $1 million on a car that looks like you’re picking the kids up from school.  A sexy Lamborghini perhaps, but a standard SUV, not likely.

It has taken over five years for Toyota to figure out how to bring the cost of the FCHV Highlander down to a marketable price range.  And while the money saved on fuel will likely reduce the lifetime cost of the vehicle—considering that the Highlander FCHV can travel 500 miles on a full tank of hydrogen—the company is still faced with a price tag well above other Highlander models.

Toyota is preparing to introduce the Highlander Advanced Fuel Cell Hybrid Vehicle (FCHV-adv) to the market by 2015 with an estimated price tag of $50,000.  The company claims it has reduced the cost of producing hydrogen fuel cell vehicles by 90 percent in the past five years and expects another 50 percent drop in price come 2015.

The baseline gasoline-powered model of the 2011 Toyota Highlander sells for around $28,000, just over half the cost of the upcoming FCHV-adv.  The Toyota Highlander Hybrid, however, costs only about $6,000 less than the FCHV-adv will.  Presumably, the drastic price difference is made up for in fuel efficiency considering analysts predict the cost of hydrogen could be as low as $2 per gallon equivalent.  Compared to the ever-increasing price of gasoline, hydrogen fuel cells are looking pretty attractive.  However, there is one major problem to contend with.

A lack of hydrogen infrastructure is what has kept most vehicle manufacturers from fully committing to developing hydrogen vehicles.  BMW, for example, announced late in 2010 the end to the road-testing program for its hydrogen vehicles due to lack of infrastructure.  But Toyota is unwavering in its quest, and is one of about eight automakers to have signed a “letter of understanding” to market fuel cell vehicles within the next five years.  The company is road-testing more than 100 of its Highlander FCHVs in the U.S. between 2010 and 2013 to prepare for the 2015 launch.

To address the concern over fueling infrastructure, Toyota partnered with Shell, Air Products, South Coast Air Quality Management District and the U.S. Department of Energy to build the first pipe-fed hydrogen fueling station in the U.S.

“Toyota plans to bring a fuel-cell vehicle to market in 2015 or sooner, and as you see, we will not be alone in the marketplace,” said Chris Hostetter, vice president of strategic resources for Toyota Motor Sales. “Building an extensive hydrogen-refueling infrastructure is the critical next step in bringing these products to market. But infrastructure development is no easy task. It will require coordination and cooperation between vehicle manufacturers, government agencies, hydrogen producers and end users. This station, for example, is the result of years of planning and a truly collaborative effort.”

It looks like hydrogen is going to be a competitive new option to power the transportation sector very soon.  With compressed natural gas, biofuels, and electric cars all making headway as well in this crucial transition, the diversified fueling infrastructure likely to ensue will hopefully ease the troubles felt by our current single-fuel oil-driven economy.