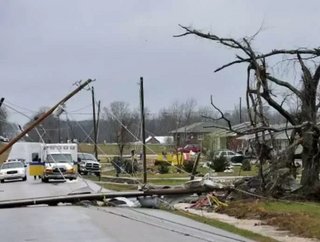 Survivors of last weeks deadly tornadoes have had difficulty carrying out the task most important to them in the days following the storm: getting in t...

Survivors of last week’s deadly tornadoes have had difficulty carrying out the task most important to them in the days following the storm: getting in touch with friends and family to make sure they’re okay. At least 38 people were killed Friday in the storm system affecting residents throughout Indiana and Kentucky. With phone lines down and cellular coverage widely unavailable, rescuers are now going door-to-door to make sure victims are not trapped in their houses.

In an age when a declaration that we are dependent on technological means of communication – phone calls, e-mail, Facebook – would be a gross understatement, survivors have been forced to come up with more creative means of getting in touch, usually good old-fashioned word of mouth.

State Police in Henryville, Indiana, a particularly hard-hit area, have set up two official gathering points at a church and community center, where survivors meet and ask after one another and their families.

A West Liberty resident, Doris Shuck, received a text message shortly after the storm from her mother checking to see if she was okay. When Shuck was unable to respond, the family drove to her mother’s house in Prestonburg, passing her parents along the way as they traveled to West Liberty. “We had no way to communicate that to each other. We’re so used to our cellphones and instant messaging. We didn’t have any of that,” she told the Boston Globe.

Social networking tools have proved useful for finding missing persons during natural disasters in the past. After the Joplin, Missouri tornado in May of 2011, a Facebook page dedicated to finding Lantz Hare, a victim missing after the storm, prompted people to use the site to share countless stories of nameless victims in hospitals throughout the state.

In Kentucky alone 19,000 residents were still without power Monday. Power has not yet been restored to 2,800 homes in Indiana and in devastated towns like Henryville, transmission lines and a substation need to be rebuilt, meaning power may not be restored for up to a week.

Cell phone providers are working to set up mobile charging stations, equipped with e-mail access, to help survivors get in touch with friends and family until power is restored.