Giant Pandas may be Key to Cellulosic Biofuels 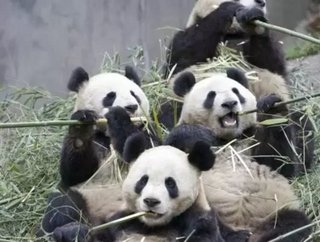 Scientists are searching far and wide for ways to sever our dependency on fossil fuels, and that sometimes means looking in some pretty unusual places...

Scientists are searching far and wide for ways to sever our dependency on fossil fuels, and that sometimes means looking in some pretty unusual places.  The latest in odd biofuel research involves investigating bacteria found in giant panda feces that help break down cellulosic plant matter.  The bacteria, once isolated, may be a key ingredient in the quest to perfect the cellulosic biofuel process.

Cellulosic biofuel is touted as one of the great hopes for the future of the biofuel industry.  Using grasses, woodchips and agricultural waste instead of food products like corn and sugarcane is the promise that cellulosic biofuel holds.  It does not compete with food production, as is a chief concern of biofuel opponents, and there is an added benefit of converting waste streams into usable energy.

At the 242nd National Meeting & Exposition of the American Chemical Society, researchers announced the unique discovery that giant panda feces indeed contains similar lignin-processing bacteria as found in termites and cattle.  A giant panda’s diet in the wild consists of about 99 percent bamboo, digesting everything from the leaves and stems to the woody shoots.  In fact, a giant panda can consume 20 to 40 pounds of bamboo in a single day.

Termites may be Key to Cellulosic Ethanol

Ashli Brown, Ph.D. and colleagues collected and analyzed feces specimens of a pair of male and female pandas at the Memphis Zoo for over a year.  They identified several varieties of digestive bacteria, including some that are strikingly similar to those found in termites, and perhaps even more efficient at breaking down cellulosic material.  The scientists believe that panda gut bacteria could convert 95 percent of plant biomass into simple sugars capable of making ethanol and other biofuels. The bacteria could eliminate the need for the high heat, harsh acids, and high pressures currently required to make cellulosic biofuels.

“Who would have guessed that ‘panda poop’ might help solve one of the major hurdles to producing biofuels, which is optimizing the breakdown of the raw plant materials used to make the fuels?” says Brown. “We hope our research will help expand the use of biofuels in the future and help cut dependency on foreign oil. We also hope it will reinforce the importance of wildlife conservation.”

The research team is now in the process of identifying the most powerful of the bacteria found in the Panda feces.  They believe that once the best bacteria are found, they could isolate the genes that produce the enzymes responsible for breaking down lignin and introduce them to yeast strains.  The yeasts could then be grown on a commercial scale to provide large amounts of the enzyme to the biofuel industry.