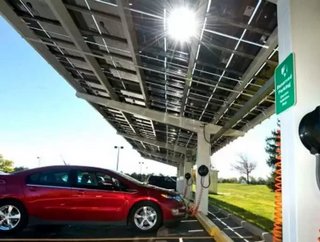 GMs Chevy Volt has been receiving rave reviews as the electric vehicle (EV) market takes off in the United States. The only problem facing the budding...

GM’s Chevy Volt has been receiving rave reviews as the electric vehicle (EV) market takes off in the United States.  The only problem facing the budding industry, however, is charging station infrastructure.  But GM has a plan to install solar powered EV charging stations across the country, and its first has been developed at Al Serra Auto Plaza in Grand Blanc, Michigan.

The concept is simple enough: develop charging stations at dealerships that sell the Chevy Volt, that way buyers of the hot new electric car can rest assured that there will be at least one charging station in town right when they buy.

Joe Serra, president of Serra Automotive, jumped at the opportunity to be the first dealership in the nation to have the solar charging station installed. “I am fortunate enough to have raised my hand at the right time,” he said.

GM is looking to install the solar powered charging stations at the more than 2,000 dealerships currently selling the Chevy Volt. “The goal was to really follow the Volt — follow that clean, renewable technology with ways to fuel the Volt using a clean energy,” says GM renewable energy manager Mary Alice Kurtz. “We definitely believe that solar energy is going to support the sustainability of the auto industry.  Will it be all of it? No. Will it be a part of it? Yes.”

The charging station will have the capability once fully-operational to charge 12 Chevy Volts at a time, with charge time running four hours.  If the solar station produces excess energy, it will be fed into the city’s electrical grid, and Serra Automotive will receive a credit on his electricity bill. “It’s cost neutral,” Serra said. “I’m hoping it can reduce my overall electricity costs.”

Yearly payments for the solar powered charging stations will cost dealers between $8,500 to $10,000, of which roughly half should be offset with energy grid feed-in rebates.