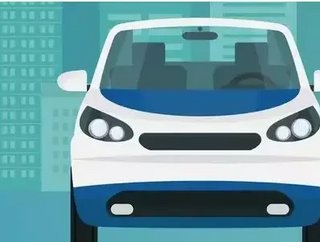 With more than two million electric vehicles sold around the world in 2019, the EV sector accounted for a record 2.5 percent of the global light-vehicle market, the report – Electric mobility after the crisis: Why an auto slowdown won't hurt EV demand - says.

In comparison, within the LV market, global sales for 2020 are currently expected to decline 20 to 25 percent from the pre-pandemic forecasts in a virus-contained scenario. In the hardest-hit countries, the crisis could force staggering drops of up to 45 percent in LV sales for the year.

China is the largest EV market in the world, accounting for 1.2 million EVs sold in 2019. The country’s quick containment of the COVID-19 pandemic and its economic rebound have contributed to a robust, developing EV ecosystem. Many EV-start-ups are pushing new, mostly locally designed EV models into the market, the report adds. 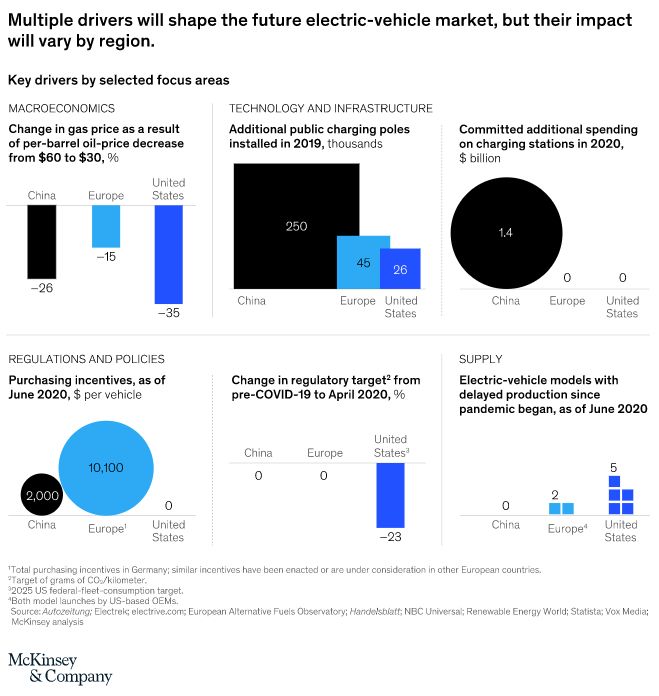 The Chinese market is also benefiting from government policies designed to support EV growth. While some of these policies were in place before the pandemic, the government is also attempting to stimulate EV sales by extending purchase subsidies of up to 22,500 renminbi (£2,585), which were about to expire, through to 2022. It has also recently exempted EVs from the purchase tax.

Even with these incentives however, the COVID-19 crisis has significantly affected EV sales in China, with only 100,000 units sold in June 2020, compared to 196,000 the previous year. Even so, the EV market share in the country slightly increased to 4.4 percent in June 2020.

Government incentives may contribute to even stronger market-share growth in the second half of 2020. For example, China has long had license-plate quotas to limit the number of new vehicles on the road so as to reduce pollution. In several large Chinese cities where EVs are already popular, local governments are now limiting new license-plate registrations to EVs and lifting restrictions on the purchase of new EVs.

Overall, McKinsey & Company expect that the number of EVs sold in China to potentially increase from 1.2 million in 2019, to between 2.4 million and 3.5 million by 2022 – about 300,000 more than in the most likely scenario predicted before the pandemic. With that shift, EV’s market share in China could rise to 11 – 14 percent, from just five percent.

“Beijing’s policies toward stimulating electric mobility in recent years have also helped create a crowded market, with numerous domestic EV makers and start-ups. The pandemic is likely to hasten consolidation of Chinese brands in 2022 and 2023.

“For instance, a Chinese EV maker planning its entry into the US market recently announced the suspension of its operations because of funding and operational problems brought on by the COVID-19 crisis. Several other players could follow, leading to consolidation and a smaller number of strong EV players in the Chinese market,” the report says. 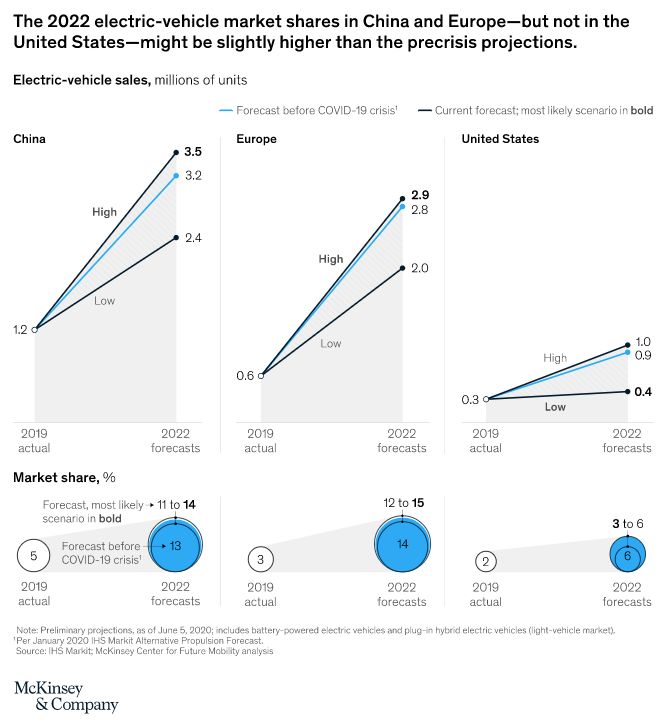 Meanwhile, despite the COVID-19 pandemic, European leaders have maintained a strict fleetwide CO2-emission target of 95 grams of CO2 per kilometre by 2021. Many major European-based OEMs have also publicly committed to reaching that target and have rolled out an unprecedented number of battery-powered EV and plug-in hybrid-EV models, with an estimated 42 models introduced in the first quarter of 2020 itself.

“European governments have introduced new purchase subsidies, tax breaks, or a combination of incentives to encourage EV adoption and promote green mobility. While they implemented those policies to improve emissions, they are also responding to increased consumer concerns about sustainability and environmental issues.

“The incentives (such as Germany’s subsidies toward the purchase of an EV), combined with the increase in EV models, has led to soaring consumer demand – despite the continued COVID-19 pandemic. For example, vehicle registrations for plug-in hybrid EVs and battery powered EVs in Germany in the first half of 2020 increased by 200 percent and 43 percent, respectively, over the first half of 2019,” the report continues.

“Europe’s EV market share is also increasing, in line with trends that were occurring before the COVID-19 crisis. The market share rose from three percent in 2019 to seven percent by June 2020. By 2022, we expect that EVs may have a 12–15 percent market share in Europe – slightly higher than the precrisis projection in the most likely scenario,” it adds.

EV production slows in US as pandemic hits economy

In sharp contrast to either China or Europe, the US EV market looks vastly different. As in China, EV sales in the US have been slowing since before the COVID-19 crisis, with annual growth decreasing from 80 percent in 2018 to 12 percent in 2019.

“The country’s slowing economy during the pandemic and the subsequent decrease in consumer spending are contributing to a lacklustre EV market. Moreover, low demand for oil – and bottomed-out oil prices – make ICE vehicles cheaper than EVs to operate in the United States, since gasoline taxes are relatively low compared with those of most other countries.

"Recent regulatory changes are also stymieing the large-scale adoption of EVs in the United States. The US federal government plans to decrease the fuel-economy standard to 40.4 miles per gallon by 2026 and is relaxing CO2-emission targets. Although some states have adopted a stricter low-emission standard, such as the one in California, the current regulatory environment will provide fewer incentives for purchasing or manufacturing EVs," the report adds.

As a result, a number of US-based OEMs have announced a delay to the start of production for new EV models, with the introduction of at least five new models postponed. Consequently, EV sales are expected to increase only slightly, going from 300,000 units sold in 2019 to between 400,000 (in the most likely scenario) and up to one million in 2022.

“Growth in the EV market share is also slowing significantly in the United States, with the sector falling from two percent in the fourth quarter of 2019 to 1.3 percent in April 2020 before reaching 2.4 percent in June 2020. The projected 2022 market share of three to six percent is below precrisis expectations,” the report states.

“If the current tailwinds for EVs in China and Europe persist, electric mobility could emerge from the COVID-19 crisis in an even stronger position than precrisis estimates had predicted. In fact, regulations and incentives will likely propel EV market share in China to roughly 35 to 50 percent and in Europe to 35 to 45 percent by 2030, with the post-COVID market environment making the aggressive scenario more likely,” it concludes.