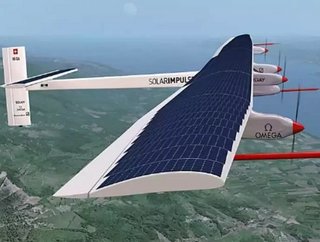 The Solar Impulse, an aircraft as big as an Airbus A340 but as light as an average car, had 12,000 solar cells on the wings turning its four electrical motors. Each of the motors charges 880-pound lithium polymer batteries during the day, enabling the aircraft to carry on flying at night.

"Solar Impulse has demonstrated that a solar-powered airplane can fly day and night using no fuel. The next challenge is to fly around the world," the organizers said on their website solarimpulse.com.

For the next five days, the Solar Impulse will stay in Rabat before taking off to Ouarzazate in the south of Morocco for the launch by King Mohammed VI of the construction of the largest-ever solar thermal plant.

"The question is not to use solar power for normal airplanes," Piccard told AFP in Madrid. "The question is more to demonstrate that we can achieve incredible goals, almost impossible goals, with new technologies, without fuel, just with solar energy, and raise awareness that if we can do it in the air, of course everybody can do it on the ground.”

In 2010, the aircraft made history as the first manned plane to fly 24/7 on just the power of the sun. It also holds a record for staying aloft for over 26 hours, setting yet another record for altitude by flying at 30,298 feet.

The Solar Impulse's 1,500 mile trip is just a rehearsal for the aircraft's planned trip around the world in 2014.