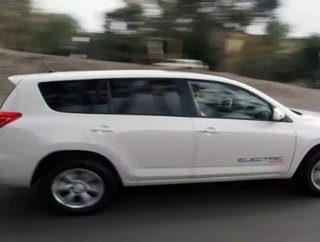 Other features, including cargo, interior space and appearance, match that of the original gas-powered RAV4 for the most part.

With only 2,600 RAV4 EVs to get built over the next three years, available in only four locations in California, however, it's clear that the vehicle is more of a “compliance car” than a vehicle the company plans to sell aggressively.

“We believe that the RAV4 EV will attract sophisticated early technology adopters, much like the first-generation Prius,” siad Bob Carter, group vice president and general manager of the Toyota division. “It’s designed for consumers who prioritize the environment and appreciate performance. We look forward to seeing how the market responds.”

The first model will go on sale this summer starting at $49,800 before state or federal tax incentives, which could amount to as much as $7,500. The car will initially be available in major metropolitan markets in California, including Sacramento, the San Francisco Bay Area, Los Angeles/Orange County and San Diego.