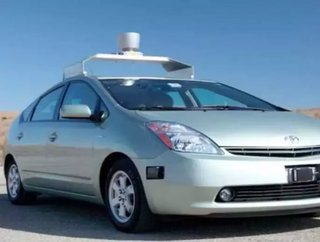 Self-driving cars are one step closer to becoming a reality. Google's efforts to develop a car that uses video cameras, radar sensors, detailed maps and lasers to navigate its way through traffic was just granted its first license for a computer-controlled, driverless Toyota Prius in the state of Nevada.

Although its first model sports a nerdy device on its roof and the technology still needs some tweaking, having the license will allow Google to test out the technology on Nevada's public roads before going mainstream.

EV Sales on the Rise

The car will have a new type of license plated created especially for it—red in color with an infinity symbol, which symbolizes that driverless vehicles are the transport of the future.

”The unique red plate will be easily recognized by the public and law enforcement and will be used only for licensed autonomous test vehicles,” Department director Bruce Breslow told the Inhabitat. “When there comes a time that vehicle manufactures market autonomous vehicles to the public, that infinity symbol will appear on a green license plate.”

BBC reports that a world of driverless cars would include safer roads, a more productive commute and fewer traffic jams. Unlike humans, Google's car adheres strictly to speed limits and rules of the road; it's not distracted by changing the radio, looking away from the road or answering a phone call. In the future, driverless cars will even be able to communicate with one another to negotiate lane changes and other actions.

In that case, the driver could be as distracted as he or she wants. "If you truly trust the intelligence of the vehicle, then you get in the vehicle and you do our work while you're traveling," Lynne Irwin, an engineer and director of the Local Roads Program at Cornell University, tells BBC.

Say goodbye to traffic. If autonomous vehicles could communicate with each other, they could essentially drive nearly bumper to bumper at higher speeds, nearly eliminating congestion.

The technology would make having a personal driver an affordable reality for future generations to come. Parents could even have the vehicle drive their children to school, return home and then cart them off to work. Drunk driving incidents and DUI's would become a thing of the past—perhaps, that's exactly what makes the Las Vegas strip and ideal starting ground.